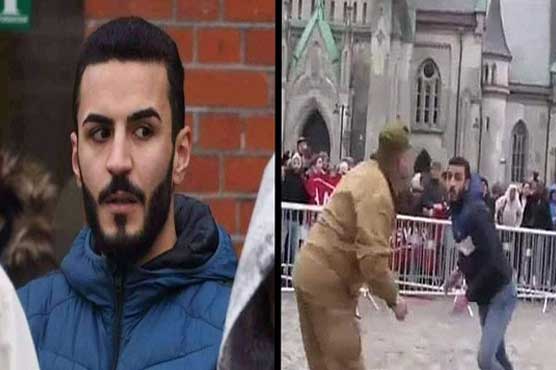 The man manages to grab Thorsen's jacket, twisting him around.

(Web Desk) – Muslims across the world have been praising the Muslim man – now being called the ‘Defender of Quran’ – who attacked Lars Thorsen, the leader of the ‘Stop Islamisation of Norway (SIAN)’, for burning a copy of the Holy Quran during an anti-Islam rally in Norway. The incident happened in the city of Kristiansand despite apparent warnings from local police officials when the anti-Islam group said it planned to do so.

Netizens took to the social media to praise Ilyas, though his exact identity could not be ascertained at the moment. In a video circulating on the social media, he could be seen jumping into the barricaded circle to save the holy book from being desecrated.

The man manages to grab Thorsen’s jacket, twisting him around. However, the assailant falls to the ground after attempting to kick the anti-Islam activist. Police then scramble to break up the fight as several other people rush at Thorsen.

The police immediately took Thorsen and his attackers into custody after a scuffle broke out, according to local media reports.

In one video clip, Thorsen is led away by police with his hands behind his back, while his initial attacker is wrestled to the ground by a group of cops.

According to reports, two copies of the religious text at first were thrown in a trash can during the rally, while Thorsen set fire to another one.

PUN Chairman Chaudhry Qamar Iqbal, in a statement, referred to Lars Thorsen, and said he has hurt the sentiments of Muslims by desecrating the Holy Quran. He said that Norwegians were peaceful people and Norway enjoyed a good reputation around the world as it respected the rights of other religions.

Iqbal said that the people of Norway and its Muslims were also hurt over the fact that the desecration took place in broad daylight and the police did nothing to stop it. He condemned the police for springing into action only when the man jumped in to stop the desecration and, instead, came to the aid of the agitator.

The PUN chairman urged the government of Norway to stop people who instigated and hurt the sentiments of others through extremism.

Muslim leaders in Norway announced that they plan to press hate crime charges against SIAN for burning Quran as well as for verbal assault.

Later, Inter-Services Public Relations Director-General Major General Asif Ghafoor, through his personal account, saluted the bravery of Ilyas for jumping through the fence and saving the Holy Quran from burning.

DG ISPR further added “All religions are and must stay respectable. Islamophbia is threat to global peace and harmony.”

Salute to brave #Ilyas for displaying courage to stop an absolutely deplorable action. Such Islamophobia based provocations only promote hatred & extremism. All religions are and must stay respectable. Islamophbia is threat to global peace and harmony.#TheGloriousQuran#Norway pic.twitter.com/CRahq5mazf

#Norway a young man save Quran from burning.
May Allah protect this young man Ameen pic.twitter.com/DPhWaFgBUe

This man (ILYAS) attacked a man who was burning Holy Quran in front of hundreds of people in Norway. He s our hero. May Allah bless this man and all Muslims with more boldness and courage. pic.twitter.com/mNJrM3js9t

Here is the real muslim hero.
We all need such type of bravery.
Love from Pakistan.#Norway#RealHeroOfMuslimUmmah pic.twitter.com/r4IjO3xd3R

Ladies and Gentleman presenting you "The defender of Quran"
Salute you brother
#Norway#RealHeroOfMuslimUmmah pic.twitter.com/xJjLpuHUkP

#Norway a young man save Quran from burning.
May Allah protect this young man Ameen pic.twitter.com/DPhWaFgBUe

Ilyas is now a social media sensation, and users are regarding him as the hero and one of the greatest defenders of Islam in modern times.

In his weekly news briefing in Islamabad on Thursday, Foreign Office Spokesperson Dr Muhammad Faisal said the Muslims respect other religions and they expect the followers of other religions to also respect their religious sentiments.

In a written statement, the Turkish Foreign Ministry called on Norwegian authorities to stop anti-Muslim and xenophobic attacks, adding that Turkey is “expecting those responsible to be brought to justice as soon as possible.”