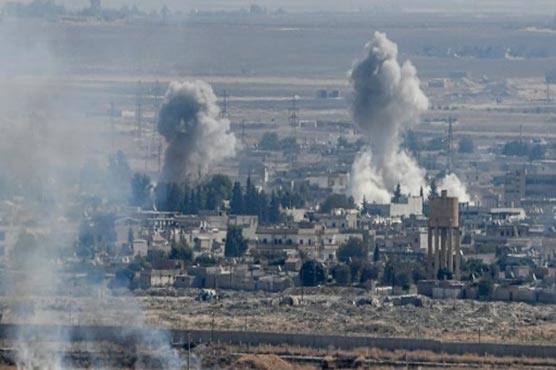 The monitor has put the number of pro-Turkish Syrian fighters killed at 120.

The Syrian Democratic Forces, the de-facto army of the Kurdish administration in northeast Syria, "launched a major counterattack overnight against Turkish forces and their Syrian proxies near Ras al-Ain," the Syrian Observatory for Human Rights said.

The Britain-based monitor said "fortifications, tunnel networks and a continuous supply of reinforcements" had enabled the SDF to hold off Turkish efforts to take the town.

An AFP correspondent in the area said clashes continued on Tuesday, despite repeated claims by Ankara in recent days that it had captured the area.

The Turkish invasion has already killed 70 civilians and 135 SDF fighters since its launch on October 9, according to the Observatory.

The monitor has put the number of pro-Turkish Syrian fighters killed at 120.

The United Nations says 160,000 people have fled their homes.

The Observatory said that pro-Ankara fighters were battling forces loyal to Manbij’s Military Council, a governing body linked to the Kurdish administration in northeastern Syria.

This came after Damascus said it had dispatched troops to the city as part of an agreement with the Kurds announced on Sunday to contain Ankara’s advance.

Turkish President Recep Tayyip Erdogan has said he expects Kurdish forces to withdraw from Manbij, which lies some 30 kilometres (20 miles) south of the Turkish border.

Turkey wants to create a 30 kilometre wide buffer zone along the border to keep away Kurdish forces it regards as "terrorists" and provide a resettlement area for some of the 3.6 million Syrian refugees currently on its soil.

The United States said it was withdrawing all of its 1,000 troops in northeastern Syria, keeping only a residual contingent of some 150 troops in the south at the Al-Tanf base near the borders with Jordan and Iraq.