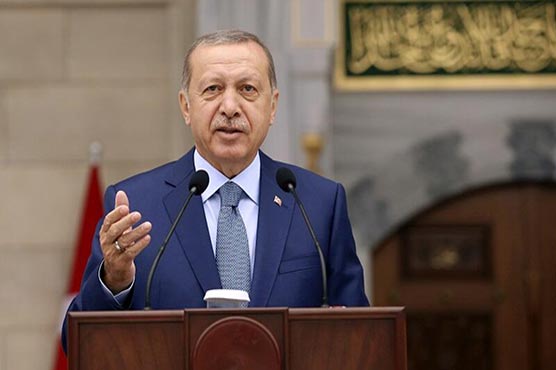 Erdogan said he expected Kurdish forces to withdraw from other key towns such as Manbij.

ISTANBUL (AFP) - Turkish President Recep Tayyip Erdogan on Monday welcomed the announcement by Washington that it was pulling out 1,000 troops from northern Syria.

"This is a positive approach," Erdogan told reporters, when asked about Sunday’s statement from US Pentagon chief Mark Esper.

Turkey is in the sixth day of its offensive against Kurdish forces in northern Syria and has seized control of two key towns, Tal Abyad and Ras al-Ain.

Erdogan said he expected Kurdish forces to withdraw from other key towns such as Manbij.

"When Manbij is evacuated, we will not go in there as Turkey. Our Arab brothers, who are the real owners, the tribes... will return there. Our approach is to ensure their return and security there," he said.

He also welcomed Russia’s "positive approach", saying Moscow did not appear to be putting any obstacles in the way of its offensive on another key town, Kobani.

"There is a lot of gossip now, but it seems... there won’t be any problem in Kobani with Russia’s positive approach as of now," Erdogan said.

The Turkish president again criticised Western allies who have come out strongly against the operation. France, Germany and Italy are among those who have suspended arms shipments to Turkey over the issue.

"Who will you side with? With your NATO ally or terrorists? They cannot answer. It is not possible to understand the goal and reason of what they are doing," he said.

"I am thinking -- is it because Turkey is the only country in NATO whose people are Muslim?"