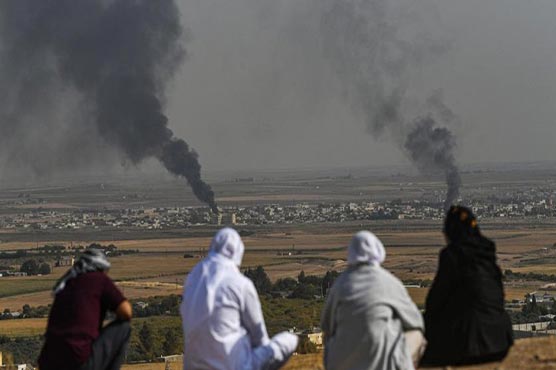 The comment confirmed a report in weekly Bild Am Sonntag.

FRANKFURT (Reuters) - Germany has banned arms exports to Turkey over its assault against Kurdish YPG militia in Syria, a foreign ministry spokeswoman said on Saturday.

Turkey launched the military operation on Wednesday after U.S. President Donald Trump withdrew some U.S. troops who had been backing Kurdish forces in the fight against Islamic State.

The United States and European Union have already warned Turkey of possible sanctions over the offensive.

“Against the backdrop of the Turkish military offensive... , the Federal Government will not issue any new permits for all military equipment that could be used by Turkey in Syria”, Foreign Minister Heiko Maas said, according to the spokeswoman.

The comment confirmed a report in weekly Bild Am Sonntag.

Turkey’s foreign minister Mevlüt Cavusoglu said that his country was undeterred by bans or embargoes.

“No matter what anyone does, no matter if it’s an arms embargo or anything else, it just strengthens us,” he told German radio station Deutsche Welle ahead of the publication of Maas’ statements.

Germany exported arms worth 243 million euros ($268 million) to Turkey in 2018, accounting for almost one third of its weapons exports, according to Bild Am Sonntag.

In the first four months of 2019, Turkey received weapons from Germany worth 184 million euros, making it the biggest recipient country, the paper said.

Defence Minister Annegret Kramp-Karrenbauer said on Friday that Germany expected all NATO partners - which include Turkey - to contribute towards stabilizing the region.