Turkey to begin Syria offensive 'shortly' despite mixed US signals 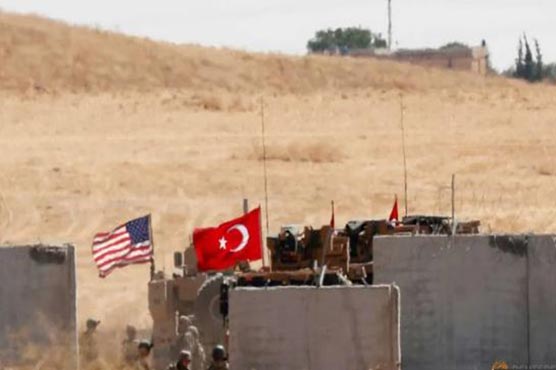 Turkey to begin Syria offensive 'shortly' despite mixed US signals

Istanbul sent more armoured vehicles to the border with Syria.

AKCAKALE (AFP) - Turkey said Tuesday it would "shortly" begin an offensive into northern Syria as President Donald Trump insisted the United States had not abandoned its Kurdish allies by pulling forces out of the area.

Istanbul sent more armoured vehicles to the border with Syria, an AFP correspondent said, with a large convoy of dozens of vehicles seen in the Turkish town of Akcakale in Sanliurfa province.

"The Turkish military is shelling one of our points on #SereKaniye Border with Turkey," the SDF said in a tweet late Tuesday, referencing the key border town of Ras al-Ain.

It was one of the places from which US troops withdrew on Monday, according to the UK-based Syrian Observatory for Human Rights.

"There were no injuries to our forces. We didn’t respond to this unprovoked attack. We are prepared to defend the people and the people of NE #Syria," the SDF said.

Border skirmishes between Turkish and Kurdish forces have taken place before, and there was no indication the latest reported shelling was part of a broader offensive.

Kurdish forces can either "defect" or Turkey will "have no choice but to stop them from disrupting our counter-Islamic State efforts," he added.

Trump has blown hot and cold since a surprise announcement on Sunday that Washington was pulling back 50 to 100 "special operators" from Syria’s northern frontier.

The troops had served as a buffer preventing a long-planned attack by Turkey against Kurdish forces, who were crucial in the campaign to defeat the Islamic State group but are viewed as "terrorists" by Ankara.

After appearing to give a green light to the Turkish invasion on Sunday, he later threatened to "obliterate" Turkey’s economy if it went too far.

But he also gave a warm account of Turkey in other tweets and announced that President Recep Tayyip Erdogan would visit Washington on November 13.

"So many people conveniently forget that Turkey is a big trading partner of the United States," he said.

Ankara had already brushed aside Trump’s warnings, with Vice-President Fuat Oktay saying: "Turkey is not a country that will act according to threats."

Turkey has always pushed hard against US support for Kurdish forces in Syria due to their links with the outlawed Kurdistan Workers’ Party (PKK) which has fought a bloody insurgency against the Turkish state since 1984.

Kurds have been ‘tossed aside’

Meanwhile, the Syrian government has welcomed the upheaval, spying an opportunity to bring the country’s Kurds back into its fold.

The Kurds have been "tossed aside" by Washington, Syrian Deputy Foreign Minister Faisal Mekdad told the pro-government Al-Watan newspaper.

Trump rejected that interpretation, tweeting: "We may be in the process of leaving Syria, but in no way have we Abandoned the Kurds, who are special people and wonderful fighters."

The SDF says it lost some 11,000 fighters as the main frontline force against the Islamic State group.

Britain said it was "deeply concerned" by Turkey’s plans to attack Kurdish fighters, who lead the SDF.

Iran, a key backer of the Syrian government, also opposed a Turkish incursion, with Foreign Minister Mohammad Javad Zarif urging "respect for Syria’s territorial integrity" in a call to Ankara.

Russia’s security council said it was important to avoid hindering the peace process in Syria.

Turkey says it wants to establish a "safe zone" on the Syrian side of the border where it could send back some of the 3.6 million refugees from the eight-year civil war.

Erdogan said Monday that the operation into Syria could "come any night without warning".

Kurds argue that Ankara’s goal is to dilute their dominance in the region with an influx of mostly Sunni Arab refugees now living in Turkey.

Trump has faced a barrage of criticism, including from close allies in Washington, for appearing to leave the Kurds to their fate.

A Turkish attack also raises the spectre of what will happen to some 10,000 Islamic State group fighters currently held in Kurdish detention centres.

Around 2,000 of them are IS "foreign fighters", and Trump assailed US allies in Europe for not taking back their nationals.

If they escape or are released, there are fears that they could reconstitute IS, less than one year after it was defeated and its "caliphate" disintegrated.

Trump declared that it would be the responsibility of Turkey and other countries to deal with IS prisoners.