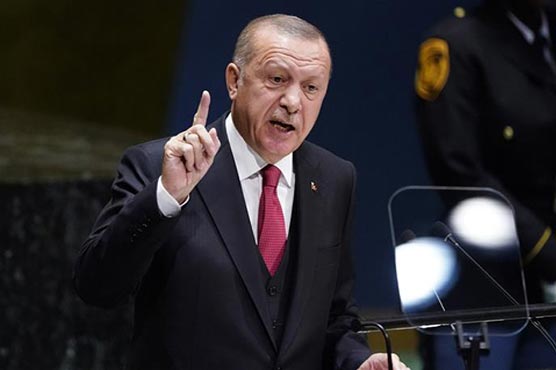 The air and ground operation east of the Euphrates river in Syria could start at any time.

ISTANBUL/BEIRUT (Reuters) - Turkey will mount a military operation in northeast Syria, it said on Saturday, after accusing Washington of not doing enough to expel Syrian Kurdish fighters from its border.

The air and ground operation east of the Euphrates river in Syria could start at any time, President Tayyip Erdogan said.

The U.S.-backed force which controls the region, the Syrian Democratic Forces (SDF) led by the Kurdish YPG militia, said it wanted stability but vowed to respond to any attack.

“We will not hesitate to turn any unprovoked attack by Turkey into an all-out war on the entire border to defend ourselves and our people,” SDF spokesman Mustafa Bali said.

NATO allies Ankara and Washington agreed in August to set up a zone in northeast Syria along the border with Turkey, which considers the YPG a terrorist organisation linked to Kurdish insurgents at home.

Turkey has accused the United States, which helped the YPG defeat Islamic State militants in Syria, of moving too slowly to create the zone. They are at odds over how far it should extend into Syria and who should control it.

Ankara wants the zone to stretch 30 km (19 miles) inside Syria and to be cleared of YPG fighters. It has repeatedly warned of launching an offensive on its own into northeast Syria, where U.S. forces are stationed alongside the SDF.

Erdogan said Turkey aimed to “water the east of Euphrates with fountains of peace” and settle refugees there.

“We gave all warnings to our interlocutors regarding the east of Euphrates and we have acted with sufficient patience,” he said at the opening of his AK Party’s annual camp.

“We’ve made our preparations, we’ve completed our operation plans, given the necessary instructions.” He added that air and ground actions could start “as soon as today or tomorrow”.

Turkey’s state-owned Anadolu Agency said late on Saturday that nine trucks loaded with armoured vehicles and one bus carrying military personnel had been sent to the border district of Akcakale, located in the southeastern province of Sanliurfa.

The convoy was sent to reinforce military units based on the Syrian border, Anadolu said. It was not immediately clear whether the shipment was in preparation for an incursion.

Ankara says it wants to settle up to 2 million Syrian refugees in the zone, nearly halving the number sheltering in Turkey from Syria’s more than eight-year conflict.

However, the refugee transfer could face resistance from allies opposed to changing the demographic balance of the area. Kurdish leaders have previously accused Turkey of seeking to resettle mainly Arab Syrians from other parts of the country in their region - which Ankara denies.

U.S. and Turkish troops have so far carried out half a dozen joint air missions over northeast Syria and three land patrols, including one on Friday. Washington deems these “concrete steps” to address Ankara’s concerns. Turkey says it is not enough.

“Land patrols, air patrols - we are seeing all of these are fiction,” Erdogan said on Saturday.

The SDF, which has said it will pull back up to 14 km (8.7 miles) on some parts of the border, is committed to the agreements under U.S.-Turkish talks and will remain so if “dangerous threats” stop, its spokesman Bali said.

Kurdish commanders have warned that a Turkish border attack would lead to a resurgence of Islamic State militants, from which the SDF seized vast territory in north and east Syria.

“Simply, there will be a big gap in the towns that our forces will withdraw from to go to defend the border, and this will give Daesh the opportunity to return,” Bali said.

In recent years, the Turkish military has launched two offensives with its Syrian insurgent allies in the northwest of the country and has forces stationed there.

Turkey’s rebel allies pledged on Friday to back an offensive by Ankara east of the Euphrates, blaming the YPG for displacing Arabs from the region.