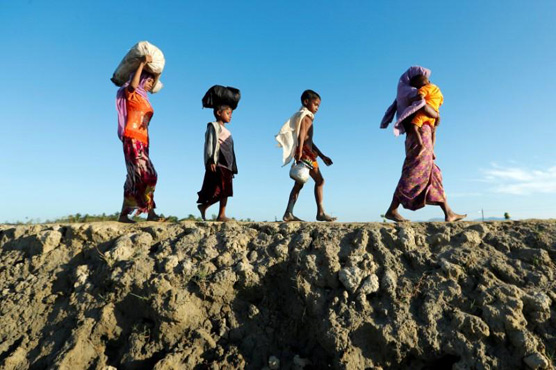 "We couldn't step out of the house for the last month because the military were looting people. They started firing on the village. So we escaped into another village," said Mohammad Shoaib, 29. Photo: Reuters

Wading through waste-deep water with children strapped to their sides, the Rohingya told Reuters how they had walked through bushes and forded monsoon-swollen streams for days from Myanmar’s Buthidaung region before reaching the border.

A seemingly never-ending line entered Bangladesh near the village of Palongkhali. Many were injured, with the elderly on makeshift stretchers, and women balanced family belongings - pots, rice sacks, clothing - on their heads.

“We couldn’t step out of the house for the last month because the military were looting people. They started firing on the village. So we escaped into another village,” said Mohammad Shoaib, 29.

He wore a yellow vest and was balancing his jute bags, carrying some food and aluminum pots, on a bamboo pole.

“Day by day things kept getting worse, so we started moving towards Bangladesh. Before we left, I went back near my village to see my house, and the entire village was burnt down,” Shoaib said. 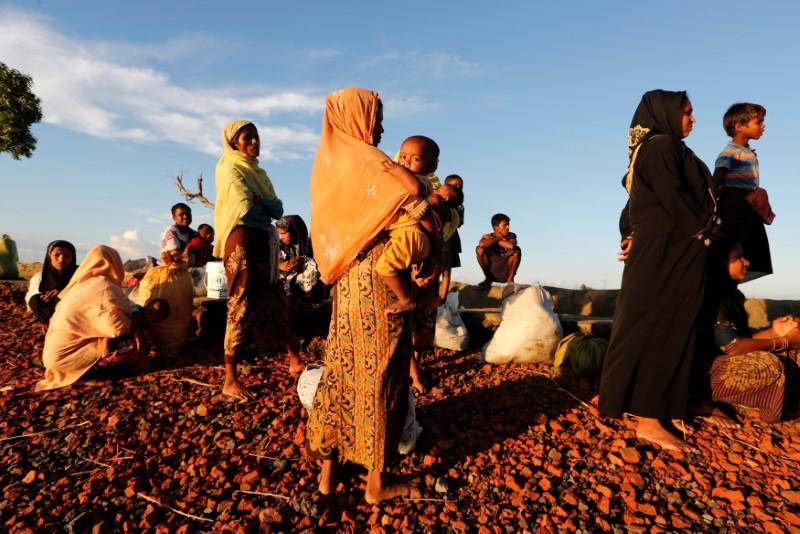 Rohingya refugees wait to receive permission from the Bangladeshi army to continue their way as they cross from Myanmar, in Teknaf, Bangladesh October 15, 2017. Photo: Reuters

They walked to join some 536,000 Rohingya Muslims who have fled Myanmar since Aug. 25, when coordinated Rohingya insurgent attacks sparked a ferocious military response, with the fleeing people accusing security forces of arson, killings and rape.

Myanmar rejects accusations of ethnic cleansing and has labeled the militants from the Arakan Rohingya Salvation Army who launched the initial attacks as terrorists who have killed civilians and burnt villages.

The refugees who arrived in Bangladesh on Monday said they were driven out by hunger because food markets in Myanmar’s western Rakhine state have been shut down and aid deliveries restricted. They also reported attacks by the military and Rakhine Buddhist mobs.

Hundreds of thousands of Rohingya had already been in Bangladesh after fleeing previous spasms of violence in Myanmar, where they have long been denied citizenship and faced restrictions on their movements and access to basic services.

Rohingya refugees arrive at a beach after crossing from Myanmar, in Teknaf, Bangladesh October 15, 2017. Photo: Reuters

Myanmar’s de facto leader, Aung San Suu Kyi, has pledged accountability for human rights abuses and says the country will accept back refugees who can prove they were residents of Myanmar.

The United States and the European Union have been considering targeted sanctions against Myanmar’s military leaders, diplomats and officials have told Reuters, although they are wary of action that could destabilize the country’s transition to democracy.

EU foreign ministers will discuss Myanmar on Monday, and their draft joint statement said the bloc “will suspend invitations to the commander-in-chief of the Myanmar/Burma armed forces and other senior military officers”.

The powerful army chief, Min Aung Hlaing, told the United States ambassador in Myanmar last week that the exodus of Rohingya, who he said were non-native “Bengalis”, was exaggerated.

Bangladesh steps up security at India border over Rohingya fears

In the chaos of Bangladesh's refugee camps, a baby is born