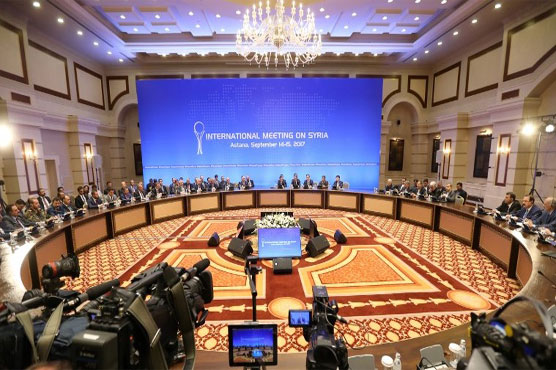 ASTANA (AFP) - Russia, Iran and Turkey on Friday agreed a deal to jointly police a fourth safe zone around Syria s Idlib province as part of a Moscow-led plan to ease the six-year conflict.

In a joint statement after two days of talks in Kazakhstan the three powers said they agreed "to allocate" their forces to patrol the zone covering rebel-held Idlib province and parts of the neighbouring Latakia, Hama and Aleppo regions.

The talks in Astana are the sixth round of negotiations Moscow has spearheaded since the start of the year as it seeks to pacify Syria after its game-changing intervention on the side of leader Bashar al-Assad.

Like Russia, Iran supports the Syrian regime of Bashar al-Assad, while Turkey has sided with the rebels.

Russia had previously deployed military police to patrol the boundaries of three zones agreed in the south of Syria, in Eastern Ghouta near Damascus, and in part of the central Homs province.

Idlib, which borders Turkey, was captured in 2015 by an alliance of jihadists and rebels.

The statement said the forces would be deployed according to maps agreed earlier this month in Ankara, but gave no further details of their exact positions.

A joint Russia-Turkish-Iranian coordination centre will be set up "aimed at coordinating activities of deescalation forces", it said.

Both the Syrian government and the armed opposition sent delegations to the talks.

The joint declaration also stated that further talks would be held in the Kazakh capital at the end of October.