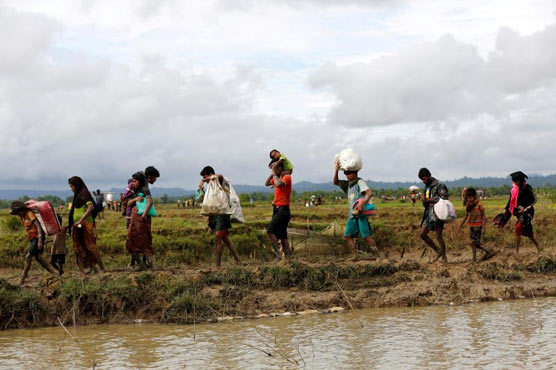 The UN is braced for a further surge of arrivals in Bangladesh with tens of thousands more believed to be displaced in Rakhine, fleeing burning villages, the army and ethnic Rakhine mobs -- who Rohingya refugees accuse of attacking civilians.

Myanmar denies the allegations, instead saying the Rohingya militants who sparked the crisis with deadly attacks on police posts on August 25 have spread fear by killing civilians and torching thousands of homes.

Exhausted, wounded and traumatised Rohingya have arrived in Bangladesh each day since violence erupted, with the young and old carried over hills and muddy fields in days-long treks or after treacherous boat journeys.

Bangladeshi authorities are planning to build a camp that could house a quarter of a million people.

But they have also urged Myanmar to stem the exodus by providing  safe zones  for the Rohingya inside Rakhine.

"Some 290,000 Rohingya arrived in Bangladesh since August 25," Joseph Tripura, a spokesman for the UN refugee agency, told AFP.

There were an estimated 1.1 million Rohingya, who are reviled as illegal immigrants and refused citizenship by Myanmar, living in Rakhine state.

Around a third of that number have fled since October when a new Rohingya militant group launched its first raids, sparking a crackdown by Myanmar s army.

Rights groups say the sheer volume of testimony by refugees alleging rape, murder and arson points to a brutal crackdown, in keeping with a systematic campaign to force the Rohingya out of the country.

It is not possible to verify their accounts as access to Rakhine is tightly controlled.

Those who have made it to Bangladesh have joined family members already encamped in the Cox s Bazar region or thrown up makeshift shelters on hills and roadsides as monsoon rains hammer down.

"They are deprived of everything. They are desperate for just basic survival," Dipayan Bhattacharyya, acting World Food Programme (WFP) head in Bangladesh, told AFP, adding that they are handing out 25 kilogramme bags of rice to families.

Hungry Rohingya are running towards every food truck that arrives in the camps and already stretched aid agencies are now bracing for a new increase in numbers.

Humanitarian organisations have launched an appeal for $77 million in response to the crisis, according to a statement by the UN resident coordinator s office in Bangladesh.

Myanmar, an overwhelmingly Buddhist country, does not want its Rohingya population.

The government regards them as illegal migrants from Bangladesh, even though many have lived in the country for generations.

Refugee camps near Bangladesh s border with Myanmar already had about 300,000 Rohingya before the upsurge in violence last month and are now overwhelmed.

Police said Bangladeshi security forces were on alert for attempts by homegrown Islamist militants to use the atrocities to recruit new fighters. Monirul Islam, the head of Dhaka police s counter-terrorism unit, said they had "taken appropriate surveillance measures".

Fear and violence stalks Rakhine state as communities turn on each other and villages continue to be set alight.

Around 27,000 Buddhists and Hindus have also been displaced by Rohingya militant attacks.

Myanmar will set up three camps to dispense aid in Rohingya-majority areas of the worst hit part of Rakhine state, state-backed media reported on Saturday.

It is the first time the government has offered to provide relief for a minority who are on the move in huge numbers.

Aung San Suu Kyi, whose star once soared as a defender of the downtrodden, has come under immense pressure to speak up for the Rohingya.

On Saturday Malaysian premier Najib Razak said Rohingya Muslims in Myanmar face systematic violence with "no mercy" shown to them and offered help for the relief effort in Bangladesh.

Pakistan summoned the ambassador of Myanmar Saturday to "convey a strong protest of the Government and people of Pakistan at the ongoing violence against the Rohingya Muslims", according to a foreign office statement.

Bangladesh authorities asked the International Organisation for Migration to build a new makeshift camp, with authorities afraid that the Rohingya could move to other parts of Bangladesh.

"All the newly arrived Rohingya will be brought in this makeshift camp and housed," Cox s Bazar magistrate Khaled Mahmud told AFP.

A Bangladesh minister said the government had decided to create a huge new camp on nearly 2,000 acres of land near an existing UN facility, where new arrivals will be registered and given aid.

Dhaka has repeatedly asked Myanmar to take back the Rohingya and address the causes of exodus.