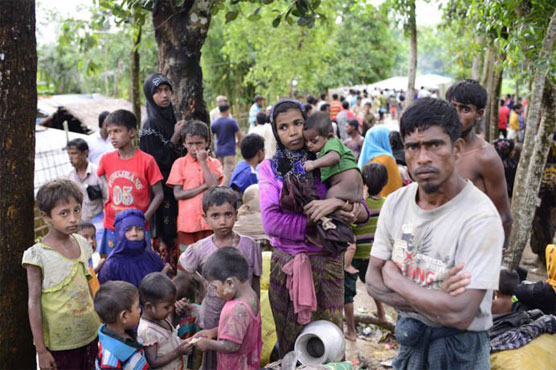 In the last two weeks alone 164,000 mostly Rohingya civilians have fled to Bangladesh.

COX S BAZAR (AFP) - More than a quarter of a million mostly Rohingya refugees have fled from Myanmar into Bangladesh, the United Nations said Thursday, as bodies washed up after boats sank attempting to cross the river that divides the countries.

Scores more have died trying to flee the fighting in Myanmar s Rakhine state, where witnesses say entire villages have been burned since Rohingya militants launched a series of coordinated attacks on August 25, prompting a military-led crackdown.

Police in Bangladesh say they have recovered the bodies of 17 people, many of them children, who drowned when boats packed with Rohingya refugees sank at the mouth of the Naf river.

Rohingya refugee Tayeba Khatun said she and her family had waited four days for a place on a boat after fleeing her township in Rakhine.

"People were squeezing into whatever space they could find on the rickety boats. I saw two of those boats sink," she told AFP inside Bangladesh.

"Most managed to swim ashore but the children were missing."

Those flocking into Bangladesh have brought with them harrowing testimony of murder, rape and widespread arson by Myanmar s army.

Most have walked for days and the United Nations says many are sick, exhausted and in desperate need of shelter, food and water.

The camps which hosted around 400,000 refugees before the latest influx are now completely overwhelmed, leaving tens of thousands of new arrivals with nowhere to shelter from the monsoon rains.

"These people are hungry, starving to death together," he said.

The latest figures mean that nearly a quarter of Myanmar s 1.1 million Rohingya Muslims have fled since October.

The Muslim Rohingya are denied citizenship in mainly Buddhist Myanmar, which is under growing international pressure over its apartheid-like treatment of the stateless minority.

UN investigators have said a military crackdown that followed ambushes by Rohingya militants in October last year may amount to ethnic cleansing.

The United States, a key ally of civilian parties as Myanmar returned to partially-elected rule, expressed concern Thursday, without assigning blame for the killings.

"We again condemn deadly attacks on Burmese security forces, but join the international community in calling on those forces to prevent further attacks on local populations in ways that are consistent with the rule of law and with full respect for human rights."

The recent fighting is the fiercest in Rakhine, Myanmar s poorest state, in years.

Cattle rancher Mohammad Shaker, 27, crossed into Bangladesh suffering from a gunshot wound to his chest that he said was inflicted by Myanmar soldiers.

"I fell on the ground and later my relatives found me. We hid in the hills for days, and this morning managed to come here," he told AFP, nursing his untreated wound.

Scores of refugees have arrived in Bangladesh needing treatment for bullet wounds, while others have lost limbs after apparently setting off landmines along the border.

On Thursday a mass funeral was held at a mosque near the border for five men whose relatives said they had been shot by the Myanmar military. The relatives carried their bodies over the border.

Myanmar says some 27,000 mainly ethnic Buddhist Rakhine have also fled in the opposite direction since August 25, accusing Rohingya militants of targeting their communities.

"If the political price of your ascension to the highest office in Myanmar is your silence, the price is surely too steep," Tutu said.

"It is incongruous for a symbol of righteousness to lead such a country; it is adding to our pain."

Myanmar said Thursday that 6,600 Rohingya homes and 201 non-Muslim homes had been burned to the ground since August 25.

They added some 30 civilians had been killed -- seven Rohingyas, seven Hindus and 16 Rakhine Buddhists -- in the fighting.