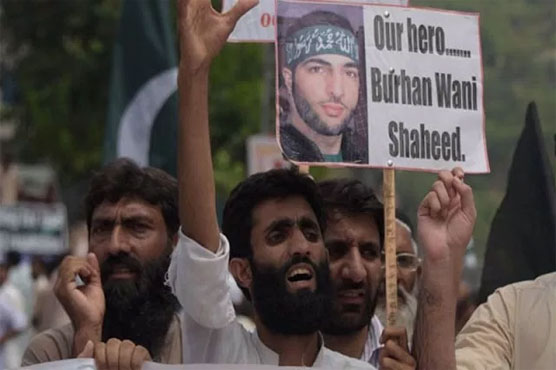 As per the calendar, the protests will be held from July 7 to July 13.

As per the calendar, the protests will be held from July 7 to July 13. A rally will be held at Tral on July 8 to pay homage to Burhan Wani and all other Kashmiri martyrs. Similar rallies will be held IN all district headquarters and elsewhere in the world where Kashmiris are residing.

Burhan Wani along with his two associates was martyred by Indian troops in a fake encounter on July 8, last year. The martyrdom week will end on 13th July with a tribute to the 22 martyrs of 1931 who were shot dead, one after the other, on that day by Dogra Army at Srinagar Central Jail.

In a bid to prevent youth from participating in the scheduled programmes, Indian police have started calling them to police stations to warn them against joining these programmes. A top police officer in a media interview in Srinagar said that a plan had been worked out to launch an arrest spree across occupied Kashmir ahead of the martyrdom anniversary.

Meanwhile, strict curfew was imposed in Maharaj Gunj, Nowhatta, Safa Kadal, Khanyar and Rainawari and other areas of Srinagar to prevent protests against the proposed extension of Goods and Services Tax to Kashmir. Member of the so-called Kashmir Assembly, Engineer Abdur Rasheed staged a sit-in outside the assembly building in Srinagar against the GST move. Police arrested dozens of his supporters during the protest, dragging Engineer Rasheed towards a police vehicle.

On the other hand, complete shutdown was observed in Shopian and Pulwama districts against the killing of three youth Jahangir Ahmad, Akhtar Aalam and Kifayat Ahmad by Indian troops at Bahmnoo in Pulwama, yesterday. All shops and other business establishments were closed while traffic was off the road.

Locals staged a protest on Srinagar-Jammu highway against the thrashing of an engineering student, Mouzam Bashir Wani, by Indian troops for overtaking an army vehicle in the area. The protesters blocked the highway for several hours.

The Chairman of Jammu and Kashmir Liberation Front, Muhammad Yasin Malik in a statement condemned the prolonged detention of ailing Chairperson of Dukhtaran-e-Millat, Aasiya Andrabi and her associate Fehmeeda Sofi. He termed their arrest as a glaring proof of duplicitous politics of the puppet rulers.

Pakistan not bound to implement US designation of Salahuddin: Sartaj

Shutdown being observed in occupied Kashmir against killing of civilians