India's Modi heads to Washington for 'no frills' Trump meet 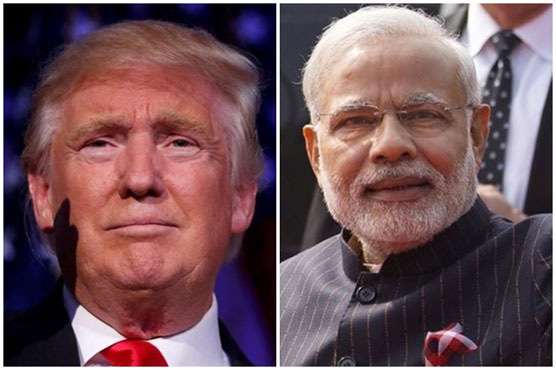 NEW DELHI (AFP) - India’s leader Narendra Modi arrived in the US for his first meeting Monday with President Donald Trump, seeking to build on growing ties and move beyond disagreements over climate change.

Prime Minister Narendra Modi vowed to work closely with the Trump administration, but obstacles soon emerged on issues such as trade and visas for Indians wanting to work in the United States.

Then Trump accused India of seeking to profit from the Paris climate accord as he announced he was pulling out of the deal this month -- drawing sharp denials from New Delhi.

Officials were eager to downplay expectations of the visit, describing it as "no frills" -- in contrast to Modi’s first US visit in 2014, when he basked in a rock star welcome at the Madison Square Garden arena in New York and addressed the United Nations.

"If there’s one thing we want (from the visit), it’s chemistry," said one senior Indian official. "If the chemistry is good then frankly everything else gets sorted."

Some commentators have argued that Modi and Trump should have a natural affinity as political outsiders who have risen to power in part by castigating the traditional ruling elite on a nationalist platform.

One US official said the two leaders had a "lot in common" and noted Modi would be the first foreign dignitary to have a working dinner at the White House under the new administration.

"We are really seeking to roll out the red carpet," said the official, speaking on condition of anonymity.

Initial signs were positive, with the leaders exchanging warm words on Twitter.

"Thank you @POTUS for the warm personal welcome. Greatly look forward to my meeting and discussions with you @realDonaldTrump," Modi tweeted in response.

Modi on Sunday was to meet with top American business leaders -- including the heads of Apple, Microsoft and Google -- ahead of his meeting the following day with Trump.

Trump’s protectionist instincts, however, are at odds with India’s efforts to boost exports and encourage Western manufacturers to "Make In India" -- a flagship Modi scheme.

The Indian premier castigated "rising parochial and protectionist attitudes" in a speech delivered shortly after Trump took office that was widely interpreted as a dig at the president’s "America first" mantra.

A proposed overhaul of H-1B visas -- used by thousands of Indian software engineers to work in the United States -- has also caused concern in New Delhi.

Analysts said Monday’s meeting at the White House would give Modi the chance to size up a US leader whose focus has so far been on ties with India’s regional rival China.

Regional security is expected to be high on the agenda for the talks as Washington considers deploying up to 5,000 extra troops in Afghanistan to help local forces fighting the Taliban and other insurgent groups.

The new administration has also indicated it could take a tougher stance on Pakistan.

Modi, a Hindu nationalist, was effectively barred from the United States for years after deadly communal riots in the western state of Gujarat during his time as chief minister. Most of those killed were Muslims.

But after his landslide election victory, Modi built a strong rapport with Obama.

Political analyst Ashley Tellis said in an interview with Asian Age that the meeting with Trump would give Modi "an opportunity to take the measure of the man, articulate India’s interests, and describe the opportunities those interests provide for the US".

"I don’t think PM Modi can change Trump’s worldview. But he can help Trump to think of India as an opportunity rather than as a problem," said Tellis, senior fellow at the Carnegie Endowment for International Peace.