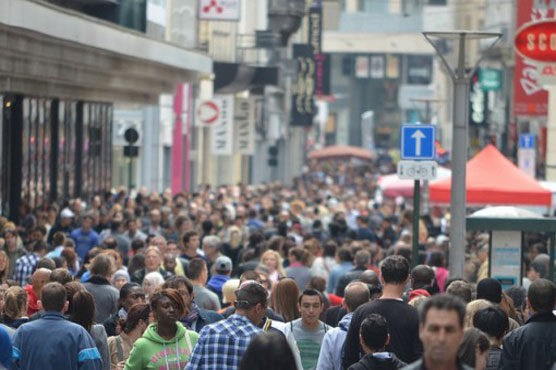 A new UN report indicates that the world population will reach 9.7 billion by 2050

(Web Desk) - UN Department of Economic and Social Affairs issued a new report on the population rush that will reach to 9.7 billion people in the world by 2050.

The report estimates that the current world population is now nearly 7.6 billion, up from 7.4 billion in 2015. With the higher levels of fertility, the growth of the population is expected to come from the least developed countries despite an overall drop in the number of children people have around the globe. This population boom is expected to top 8.5 billion by 2030.

“With roughly 83 million people being added to the world s population every year, the upward trend in population size is expected to continue, even assuming that fertility levels will continue to decline,” said the report s authors at the UN Department of Economic and Social Affairs

UN also reports on the extensive fertility rates across the world, with cross comparison of fertility rate in Europe and Africa. Nigeria currently ranks 7th in the world, by 2050, Nigeria will rank on top three populous countries in the world leaving behind United States.

Many concerned scientists and public speakers stated their concerns for many years, on over population in the world.
American Biologist Paul Ehrlich worked extensively on Malthusian principle, in his book, “The population bomb”, he writes on consequences of what overpopulation can do to the earth. In one of his interviews to a news report, Ehrlich commented that “The basic point is so simple; we have a finite planet with finite resources. In such a system, you can’t have infinite population grown.”

Similarly, prominent scientists like David Attenborough and Stephen Hawking spoke on this issue on numerous occasions saying that while we are increasing the population of the Earth we are refusing to maintain a better sustainability that could stir up a global disaster.