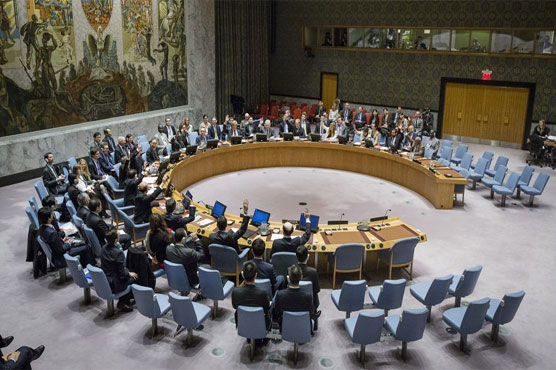 UN Security Council on Monday vowed to push all countries to tighten sanctions against North Korea.

UNITED NATIONS (AFP) - The UN Security Council on Monday vowed to push all countries to tighten sanctions against North Korea as it prepared for a closed-door meeting called in response to the latest missile launch.

In a unanimous statement backed by China, Pyongyang s ally, the council strongly condemned the test-firing on Sunday and instructed the UN sanctions committee to redouble efforts to implement a raft of tough measures adopted last year.

The US-drafted statement was agreed on the eve of the emergency meeting requested by the United States, Japan and South Korea to discuss a course of action on North Korea.

The United States has for weeks been negotiating a new Security Council sanctions resolution with China, but US Ambassador Nikki Haley said last week that no final draft text had been clinched.

"This is the same movie that keeps playing. He continues to test. We ve got to do action," Haley told MSNBC television.

"You know, some say, oh, but sanctions haven t worked. First of all, when the entire international community speaks with one voice, it does work," she countered.

"It lets them know that they are on an island and we re all against them and that they need to correct their behavior."

North Korea on Sunday launched the Pukguksong-2, which was described by Washington as medium-range missile, from Pukchang in South Phyongan province.

It traveled about 310 miles (500 kilometers) before landing in the Sea of Japan, according to South Korea s armed forces.

The launch was the latest in a series this year as Pyongyang steps up its efforts to develop an intercontinental ballistic missile capable of hitting the United States.

"We call on the DPRK to stop further testing and allow space to explore the resumption of meaningful dialogue."

The United States says it is willing to enter into talks with North Korea if it halts its nuclear and missile tests.

Sunday s missile test came as US President Donald Trump was on his first trip abroad, visiting Saudi Arabia, Israel and the Vatican.

So far almost all the North s missiles have been liquid-fueled, meaning they have to be time-consumingly filled with propellant before launch.

Solid fuel missiles can be fired far more rapidly, dramatically shortening the time available for any attempt to intervene and prevent a launch.

North Korean leader Kim Jong-Un said "with pride" that the Pukguksong-2 was a "very accurate" missile and a "successful strategic weapon," KCNA said, adding he "approved the deployment of this weapon system for action."

The launch "completely verified" the reliability and accuracy of the device, and its late-stage warhead guidance system, KCNA said, adding the test results were "perfect."

The test-firing came just one week after the North launched a Hwasong-12 intermediate-range missile, which according to Pyongyang was capable of carrying a "heavy" nuclear warhead."

After that launch, the council met to discuss tightening sanctions but there was no concrete action.

During last week s closed-door meeting, China insisted that there be no mention of a resolution in remarks read by the council president at the end of the meeting, diplomats said.

North Korea has carried out two atomic tests and dozens of missile launches since the beginning of last year in its quest to develop a missile capable of delivering a nuclear warhead to the continental United States.