We are very proud of Malala Yousafzai as she is proud of Pakistan: Maliha Lodhi 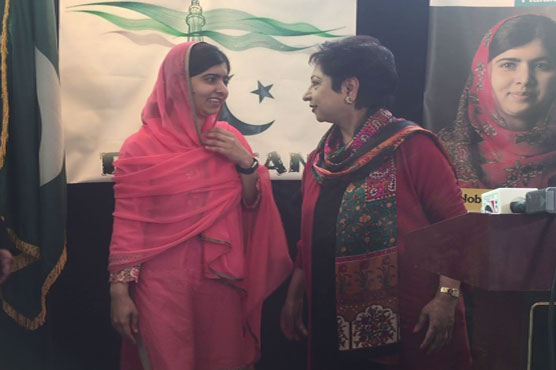 She congratulated and praised Malala on being designated as United Nations Messenger of Peace.

NEW YORK (Dunya News) -  Pakistan’s Ambassador to the United Nations Maleeha Lodhi congratulated and praised Malala Yousafzai on being designated as United Nations Messenger of Peace with a special focus on girls’ education.

“This is a proud moment for Pakistan and every Pakistani that Malala has been appointed as the youngest ever UN Messenger of Peace,” she said.

“In her address Malala told a packed hall at the UN that she is proud of being a Pakistani and a Muslim. Her statements regarding Pakistan, Swat and being a Muslim were very important as it was a message to the world,” she added.

Maliha Lodhi said that Malala made it evident to the world that whatever TV and other media forums tell them about Pakistan and the way people see her country through the prism of terrorism is an entirely a wrong perspective.

“Malala explained that people like her and others exist in Pakistan who resist such forces. She revealed that misperceptions are present in the western media concerning Islam and Muslims. As a Muslim, she reminded the people that the first word from Quran sent to the world was ‘Iqra’ which means to learn,” told Maliha Lodhi.

“We are very proud of Malala Yousafzai as she is proud of Pakistan,” she asserted.

Indian spy got what he deserved: Khursheed Shah

Pakistan to soon resolve circular debt through issuance of bonds