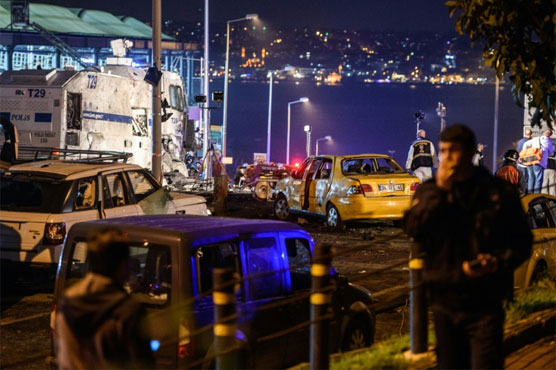 Flags were at half mast, and Sunday was declared a day of national mourning.

ISTANBUL (Reuters) - Turkey said on Sunday that Kurdish militants may be responsible for the two bombs that killed 38 people and wounded 155 in what looked to be a coordinated attack on police outside a soccer stadium in Istanbul after a match between two top teams.

The blasts on Saturday night - a car bomb outside the Vodafone Arena, home to Istanbul’s Besiktas soccer team, followed by a suicide bomb attack in an adjacent park less than a minute later - shook a nation still trying to recover from a series of deadly bombings this year in cities including Istanbul and the capital Ankara.

There was no claim of responsibility, but Deputy Prime Minister Numan Kurtulmus said early indications pointed to the outlawed Kurdistan Workers Party (PKK), which has carried out a three-decade insurgency, mainly in Turkey’s largely Kurdish southeast. Ten people have been detained so far, he said.

"The arrows point at the PKK," Kurtulmus told CNN Turk in an interview. "There will be an announcement once the investigations are over. We cannot say anything definite for now." 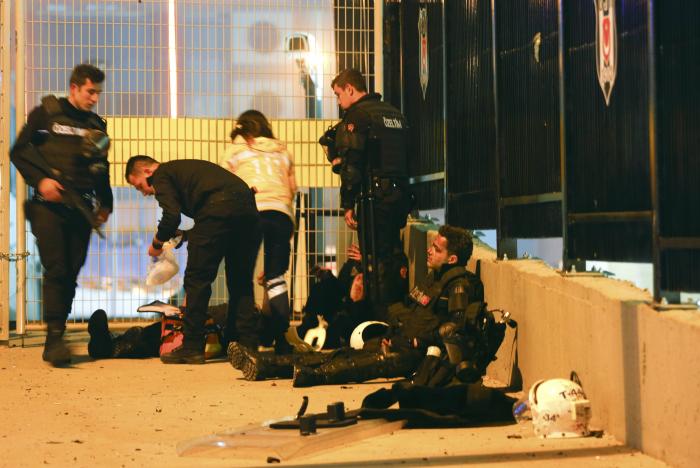 Turkish policemen at the site of an explosion in central Istanbul, Turkey, December 10, 2016. REUTERS/Murad Sezer

He said Turkey’s allies should show solidarity with it in the fight against terrorism, a reference to the long-standing disagreement with fellow NATO member Washington over Syria policy. The United States backs the Syrian Kurdish YPG in the fight against Islamic State. Turkey says the militia is an extension of the PKK and a terrorist group.

Flags were at half mast, and Sunday was declared a day of national mourning, the prime minister’s office said in a statement. A march against terrorism had been called for noon local time (0900 GMT) in Istanbul, Kurtulmus said.

President Tayyip Erdogan cancelled a planned trip to Kazakhstan, his office said. Erdogan described the blasts as a terrorist attack on police and civilians. He said the aim of the bombings, two hours after the end of a match attended by thousands of people, had been to cause maximum casualties.

"Nobody should doubt that with God’s will, we as a countryand a nation will overcome terror, terrorist organisations ...and the forces behind them," he said in a statement.

In addition to the Kurdish insurgency, Turkey is also battling Islamic State as a member of the U.S.-led coalition against the militant group. Less than a week ago, Islamic State urged its supporters to target Turkey’s "security, military, economic and media establishment".

‘THEY BRING US TOGETHER’

Interior Minister Suleyman Soylu said the first explosion, which came around two hours after the end of the match between Besiktas and Bursaspor, was at an assembly point for riot police. The second came as police surrounded the suicide bomber in the nearby Macka park.

"According to the latest information we have received, 38 of our nation’s children have reached martyrdom after last night’s cruel attack," Soylu told a news conference.

"These cruel attacks do not discourage us, to the contrary they brings us together as a nation."

He said seven victims were civilians and one remained unidentified. A total of 155 people were being treated in hospital, with 14 of them in intensive care and five in surgery. 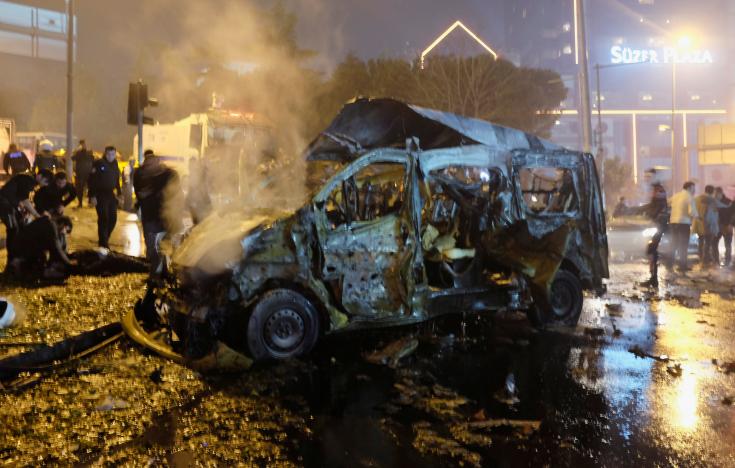 A damaged vehicle is seen after a blast in Istanbul, Turkey, December 10, 2016. REUTERS/Murad Sezer

Soylu said 13 people had been detained so far in relation to the attack, citing evidence collected from the detonated vehicle.

NATO Secretary-General Jens Stoltenberg condemned what he described as "horrific acts of terror", while European leaders also sent messages of solidarity. The United States condemned the attack and said it stood with its NATO ally.

The bombings come five months after Turkey was shaken by a failed military coup, in which more than 240 people were killed, many of them in Istanbul, as rogue soldiers commandeered tanks and fighter jets in a bid to seize power.

Istanbul has seen several other attacks this year, including in June, when around 45 people were killed and hundreds wounded as three suspected Islamic State militants carried out a gun and bomb attack on its main Ataturk airport.

Turkey to fight terror 'to the end' after attacks kill 38