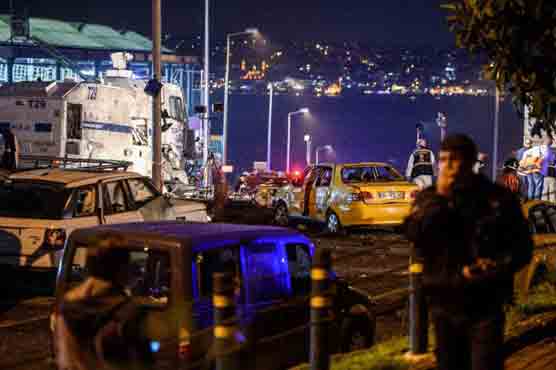 ISTANBUL (AFP) - Fifteen people were killed and almost 70 wounded in Istanbul on Saturday when twin bombings struck the heart of the city close to the stadium of top flight football giants Besiktas after a major game.

A car bomb detonated outside the Vodafone Arena football stadium on the shores of the Bosphorus after the Super Lig match between Besiktas and Bursaspor while a suicide attacker struck a nearby park, officials said.

The authorities did not say who was behind the blasts but the attacks were the latest in a year that has seen Istanbul and other Turkish cities rocked by a string of attacks blamed on Islamic State jihadists and Kurdish militants.

The health ministry said in a statement that 15 people were killed and 69 wounded.

"An act of terror targeted our security forces and citizens at Besiktas tonight," President Recep Tayyip Erdogan said in a statement. Besiktas is also the name of the neighbourhood around club s arena.

Erdogan said the blasts shortly after the end of the match sought to cause maximum loss of life.

"We have witnessed once more here in Istanbul the ugly face of terror which tramples down any form of value and morals," he said.

Interior Minister Suleyman Soylu said one blast took place outside the stadium and another at Macka Park, a popular meeting place just above the sports venue.

"The explosion at Macka Park is believed to have been carried out by a suicide bomber."

He said the stadium attack targeted a bus of riot police.

State broadcaster TRT showed images of the wreckage of a car, engulfed in flames with emergency services swarming around the scene outside the sports venue.

Other footage showed severely damaged police vehicles, while witnesses said the force of the blast had shattered the windows of several nearby homes.

An AFP correspondent near the stadium saw ambulances gathering in the aftermath of the explosion, as well as broken glass on the road.

"I heard two explosions in less than one minute, followed by the sound of gunshots," one witness told AFP on condition of anonymity.

Besiktas football club issued a statement condemning the attack and confirming none of the fans or players were hurt.

"Terrorists... attacked our heroic security forces who ensure that both our fans and Bursaspor s supporters are safe. We will stand firm against the vile attackers who will never achieve their goal."

Police cordoned off the area around the stadium immediately after the blasts, which occurred near the Ottoman-era Dolmabahce palace that houses Prime Minister Binali Yildirim s offices in Istanbul.

The scene is also about a kilometre (0.6 miles) from the busy Taksim Square, a magnet for tourists.

Erdogan was in Istanbul at the time of the blast at his residence in the suburb of Tarabya further down the Bosphorus, state media said.

The government slapped a broadcast ban on footage of the attack, as is becoming typical in the aftermath of major incidents in the country.

There was no immediate claim of responsibility for Saturday s attack.

In his statement, Erdogan said that "the name or the method of the terrorist organisation which perpetrated the vile attack" did not matter.

"Nobody should doubt that we will defeat terror, terror groups, terrorists and of course the forces behind them, with God s help," he said.

In June, 47 people were killed in a triple suicide bombing and gun attack at Istanbul s Ataturk airport, with authorities blaming IS.

Another 57 people, 34 of them children, were killed in August in a suicide attack by an IS-linked bomber at a Kurdish wedding in the southeastern city of Gaziantep.

But there have also been deadly bombings claimed by the Kurdistan Freedom Falcons (TAK), seen as a splinter group of the outlawed Kurdistan Workers Party (PKK).

The US embassy in Turkey condemned the latest attack.

"Our hearts and prayers are with the people of #Istanbul tonight," the embassy wrote on Twitter. "We condemn tonight s cowardly attack, and salute the courage of the Turkish people as we stand with them against terror."

Turkey is still reeling from a failed July 15 coup blamed by the government on the US-based Islamic preacher Fethullah Gulen that has been followed by a relentless purge of his alleged supporters from state institutions.

Saturday s attack came after the Turkish army and its Syrian rebel allies on Saturday entered the IS bastion of Al-Bab in northern Syria, according to a monitoring group.

Al-Bab is the last bastion IS has in Syria s northern Aleppo province.

The explosions also came hours after Turkey s ruling party submitted a parliamentary bill that would expand the powers -- and possibly the tenure -- of Erdogan, a move his opponents fear will lead to one-man rule.