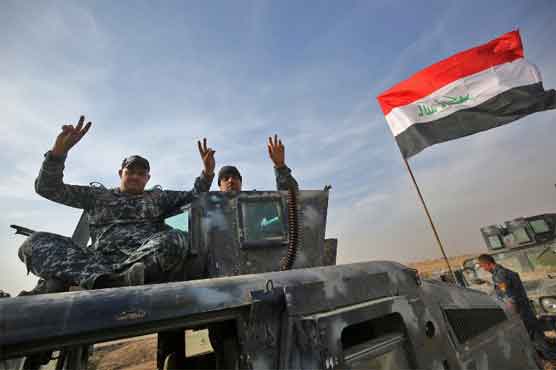 The battle for Iraq's second city Mosul neared the remains of ancient Nimrud on Thursday.

BAGHDAD (AFP) - The battle for Iraq s second city Mosul neared the remains of ancient Nimrud on Thursday, as the offensive against the Islamic State group s Syrian stronghold Raqa was hampered by a sandstorm.

Backed by a US-led coalition, Iraqi forces and a Kurdish-Arab militia alliance are advancing on Mosul and Raqa in separate assaults aimed at driving IS from its last major bastions.

The coalition, which launched air strikes against IS two years ago, is looking to deal a fatal blow to the self-styled "caliphate" the jihadists declared in mid-2014.

Launched on October 17, the Iraqi offensive has seen federal forces and Kurdish peshmerga fighters advance on Mosul from the east, south and north, pushing inside the eastern city limits last week.

On Thursday the military said troops and allied militia were moving forward on two IS-held villages near Nimrud, which is some 30 kilometres (20 miles) south of Mosul.

"Units of the 9th Armoured Division and the Hashed al-Ashaeri (tribal militia) are beginning to advance to liberate the villages of Abbas Rajab and Al-Nomaniyah, toward Nimrud," the Joint Operations Command said, later announcing that Abbas Rajab had been retaken.

Nimrud was the one of the great centres of the ancient Middle East. Founded in the 13th century BC, it became the capital of the Assyrian empire, whose rulers built vast palaces and monuments that have drawn archaeologists for more than 150 years.

In April last year, IS posted video on the internet of its fighters sledgehammering monuments before planting explosives around the site and blowing it up.

It was part of a campaign of destruction against heritage sites under jihadist control that also took in ancient Nineveh on the outskirts of Mosul, Hatra in the desert to the south and Palmyra in neighbouring Syria.

IS says the ancient monuments are idols that violate the teachings of its extreme form of Sunni Islam.

In Syria, the US-backed Syrian Democratic Forces (SDF) said their advance on Raqa was being held back by a sandstorm that had hit the desert province.

"The situation is dangerous today because there is no visibility due to a desert sandstorm," an SDF commander told AFP, speaking on condition of anonymity.

"We fear that Daesh will take advantage of this to move in and launch a counter-attack," he said, using an Arabic acronym for IS.

Speaking in Ain Issa, the main staging point for the operation some 50 kilometres (30 miles) north of Raqa, the commander said the sandstorm was also impeding visibility for coalition warplanes.

The SDF launched the offensive on Saturday and has been pushing south from areas near the Turkish border towards Raqa.

The commander said SDF forces advancing south from Ain Issa and Suluk were close to converging at a position some 30 kilometres (20 miles) from Raqa.

"We have been able to cover a third of the distance that separated us from Raqa," SDF spokeswoman Jihan Sheikh Ahmed said, adding that 15 villages and hamlets had been taken.

Ahmed said thousands of civilians had fled their homes since the start of the assault and pleaded for international assistance.

"More than 5,000 displaced people have arrived in regions liberated and secured by our forces. They are coming from combat zones through a corridor we opened for them," she said.

"We need international help because our capacities are limited and, with winter coming, there is no camp to host them," she said.

Dozens of families have been seen fleeing towards SDF lines in recent days.

Many have been arriving in trucks and cars around Ain Issa, loaded down with belongings and in some cases with livestock including cows and sheep.

Raqa had a population of some 240,000 before the eruption of Syria s civil war in 2011 but more than 80,000 people have since fled there from other parts of the country.

Mosul is much bigger, home to more than a million people, and more than 45,000 people have fled since the offensive began.

Aid workers have expressed fears of a major humanitarian crisis once fighting begins in earnest inside the city, where IS is expected to use civilians as human shields.

Rights groups have also raised concerns for fleeing civilians, amid accusations of abuses by some Iraqi forces.

Amnesty International called Thursday on the Iraqi government to investigate the killings of six residents south of Mosul who it said were executed by men in federal police uniforms during the offensive.

Iraq s federal police issued a statement denying its forces had been involved in extrajudicial killings.