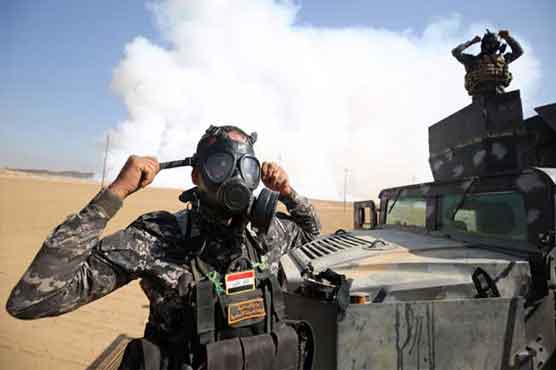 US-backed alliance pushed closer to Raqa in Syria while Iraqi forces seized a town near Mosul.

After announcing the launch of the long-awaited assault on Raqa on Sunday, the Syrian Democratic Forces (SDF) alliance said it had moved south towards the city despite fierce militant resistance.

South of Mosul, Iraqi forces retook Hamam al-Alil from IS, a key objective in their three-week advance on the city.

Iraqi forces said Monday they found a mass grave in the area containing around 100 decapitated bodies.

Raqa and Mosul are the last major cities in Syria and Iraq under the militants’ control.

Their capture would deal a huge blow to the self-styled "caliphate" IS declared in mid-2014.

The US-led coalition that launched operations against IS two years ago is providing crucial backing to the offensives, with air strikes and special forces advisers on the ground.

SDF fighters had pushed at least 10 kilometres (six miles) south towards the city from the towns of Ain Issa and Suluk, she said.

In both cases the SDF was still some distance from Raqa -- on the Ain Issa front at least 30 kilometres (20 miles) away.

"The offensive is going according to plan," said Ahmed, adding that the SDF had captured at least 10 villages.

‘Fight will not be easy’

An SDF commander said IS was fighting back with its favourite tactic of sending suicide bombers in explosives-packed vehicles against advancing forces.

"IS is sending car bombers but coalition planes and our anti-tank weapons are limiting their effectiveness," the commander said, speaking on condition of anonymity.

After taking Abu Ilaj north of Raqa, SDF fighters dug trenches and piled sandbags at the entrance to the village.

"In every area that we advance we are digging trenches with tractors and bulldozers to protect the front line, to prevent the militants from getting in and to stop car bombs," one fighter said.

The SDF says some 30,000 of its fighters are taking part in operation "Wrath of the Euphrates", which aims to surround and isolate IS inside Raqa before making an assault on the city itself.

Officials have warned that the battle is likely to be long and difficult.

"As in Mosul, the fight will not be easy and there is hard work ahead," US Defence Secretary Ashton Carter said.

Driving IS from both cities has been the endgame since the US-led coalition launched air strikes against it in 2014, shortly after the militants seized swathes of Syria and Iraq.

Some 50 US military advisers are involved in the Raqa operation, particularly to guide air strikes, according to an SDF source.

Near Mosul, forces established full control over Hamam al-Alil, the last town of note on the way to the city from the south, AFP reporters said.

It lies on the west bank of the Tigris river, about 15 kilometres (nine miles) southeast of the edge of Mosul.

Life quickly resumed in Hamam al-Alil, with some residents reopening shops and others bathing in the town’s sulphur springs.

However, police said they found a mass grave Monday at an agricultural collage west of Hamam al-Alil.

The Joint Operations Command said "Iraqi forces found... 100 bodies of citizens with their heads cut off".

The US is using Apache helicopters in the battle to retake the city, the Pentagon said late Monday, directing attacks at explosive-packed vehicles.

Fighting also continued east of Mosul, with Kurdish forces advancing into the town of Bashiqa and the elite Counter Terrorism Service battling IS in the city’s suburbs.

"Up to seven neighbourhoods are under the control of counter-terrorism forces, and they are now completely securing them and clearing them of pockets of terrorists," CTS spokesman Sabah al-Noman told AFP.

A peshmerga statement said its forces were in Bashiqa and had "begun house-to-house clearances".

The Mosul offensive has advanced faster than expected, but the battle for Raqa is more complicated.

Unlike in Iraq where the coalition has a state-controlled ally in federal forces, in Syria its ground partner is comprised of local militias, including some rebel groups that have battled President Bashar al-Assad’s regime.

Aid groups have voiced concerns for civilians trapped in both Mosul and Raqa, warning they may be used as human shields.

More than 34,000 people have been displaced since the Mosul operation began on October 17, the International Organization for Migration said.

More than a million people are believed to be in Mosul.