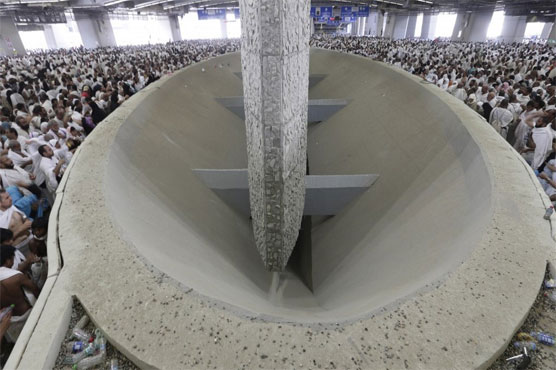 The stoning ritual is performed three times over the coming days.

MINA, Saudi Arabia (AFP) - Muslim pilgrims reached Mina on Monday for the ritual stoning of the devil, the last major rite of the annual hajj and the scene of a devastating stampede last year.

A number of safety measures have been introduced to prevent a repeat of last year’s tragedy, which killed around 2,300 people as they made their way to the Jamarat Bridge to perform the stoning.

The bridge is multi-storey to accommodate the huge number of pilgrims -- more than 1.8 million this year.

Pilgrims threw pebbles they had gathered in nearby Muzdalifah on Sunday evening at walls representing the devil.

Saudi King Salman arrived in Mina on Sunday to ensure the pilgrims can "perform their rituals easily, conveniently and safely", the official Saudi Press Agency reported.

He was also briefed on preparations for the safe movement of pilgrims between Muzdalifah and Mina.

The stoning ritual is performed three times over the coming days.

The first comes at the start of Eid al-Azha, the feast of sacrifice, Islam’s holiest, which is marked by more than 1.5 billion Muslims worldwide.

After the stoning, sheep are slaughtered and the meat distributed to needy Muslims, symbolising Prophet Ibrahim’s willingness to sacrifice Ismail on the orders of Allah, who provided a lamb in the boy’s place at the last moment.

The stoning ritual emulates the actions of Ibrahim in resisting the temptation to disobey.

Last year’s stampede was the worst disaster in the pilgrimage’s history.

Saudi Arabia has stuck by its initial death toll of 769, but figures compiled from officials in more than 30 countries gave a tally almost three times higher.

Authorities announced an investigation into the tragedy but no findings have ever been released.

Several new safety measures have been introduced this year.

Among these is the distribution of bracelets which store pilgrims’ personal data. Roads have also been widened in the Jamarat area, newspapers reported.

Aerial photographs on Saudi television showed rivers of pilgrims flowing toward the Jamarat on multiple roads.

A security officer was shown monitoring the crowds on closed-circuit television screens.

Helicopters have been monitoring the flow of pilgrims, while police have been directing them on the ground to make sure there are no bottlenecks.

Pilgrims have told AFP they feel safe and have noticed organisational improvements.

"The Saudis organise everything for us. We are truly at ease here," Youssef al-Mehri, 24, from Oman said with a prayer rug slung over his shoulder.

But the new safety measures adopted by Sunni-dominated Saudi Arabia failed to satisfy Shiite Iran, which has angrily questioned the kingdom’s custodianship of Islam’s holiest places.

Iran lost the largest number of dead last year, at 464.

Its 64,000 pilgrims have been excluded from this year’s hajj for the first time in decades after the regional rivals failed to agree on security and logistics.

Hundreds of thousands of Iranian faithful held an alternative pilgrimage to the Shia holy city of Karbala in Iraq on Saturday.

Saudi Arabia said on Sunday that it had launched a new television channel to broadcast the hajj rituals in the Farsi language of Iran.

The pilgrimage is one of the five pillars of Islam, which capable Muslims must perform at least once, marking the spiritual peak of their lives.

The pilgrims come from every corner of the globe. Indonesia -- the most populous Muslim nation -- has the largest contingent.

Eid to be celebrated in Saudi Arabia, USA and some other countries today