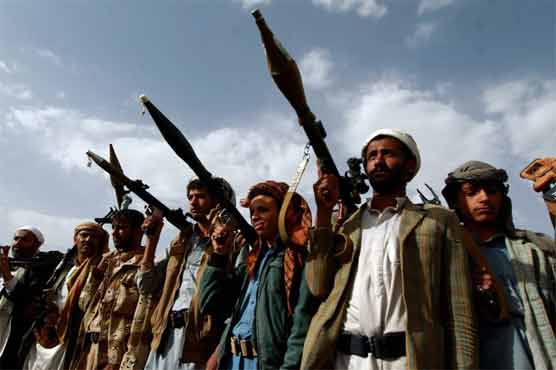 Yemen government said that peace talks with rebels underway since April had ended without agreement.

ADEN (AFP) - Yemen s government said Thursday that peace talks underway since April had ended without agreement after Shiite rebels and their allies formed a 10-member "supreme council" to run the war-torn nation.

"The negotiations have completely ended," said Abdullah al-Olaimi, deputy director of the Yemeni president s office and a member of the government team to the UN-brokered talks being held in Kuwait.

"We have participated and exercised patience for the sake of our people and we end the negotiations for their sake," Olaimi said on his Twitter account.

In Riyadh, President Abedrabbo Mansour Hadi s government said the rebels had "fired the bullet of mercy" killing off the talks.

They did not name the council s members.

"The aim is to unify efforts to confront the aggression by Saudi Arabia and its allies," they said in reference to the Riyadh-led Arab coalition that launched a military campaign against the rebels in March 2015 in support of Hadi.

The job of the council would be to "manage state affairs politically, militarily, economically, administratively, socially and in security".

Ould Cheikh Ahmed who has been brokering 100 days of talks aimed at a peaceful settlement condemned the move without formally announcing the collapse of negotiations.

"This is a clear violation of the Yemeni constitution" as well as Resolution 2216, he said in a statement released in Kuwait.

The resolution calls on the Huthis to withdraw from territories they occupied in 2014, to hand over their arms and return state institutions to the legitimate government.

The rebels have "missed an opportunity for peace which the Yemeni people needed", Mikhlafi said on his Twitter account.

"We call on the international community to condemn the new coup against the constitutional legitimacy and hold the Huthi-Saleh alliance responsible" for the failure of the talks, he said.

The rebels overran Sanaa in September 2014 and expanded their control to other parts of Yemen.

In February last year, they had set up a "Supreme Revolutionary Council" to run the country after they announced the dissolution of the government and parliament.

UN-sponsored talks between the rebels and representatives of Hadi s government, which began on April 21, have failed to make headway.

The negotiations were launched after the United Nations secured an agreement on a ceasefire in the war-torn country.

The main stumbling block at the talks in Kuwait has been the form of the government in Sanaa.

The Hadi government backed by Saudi Arabia say that he is the legitimate head of state and should preside over a transitional period in the country.

But the rebels insist on forming a national unity government to oversee the transition.

More than 6,400 people have been killed in Yemen since the Saudi-led coalition intervened in support of Hadi s government.

Another 2.8 million people have been displaced and more than 80 percent of the population urgently needs humanitarian aid, according to UN figures.