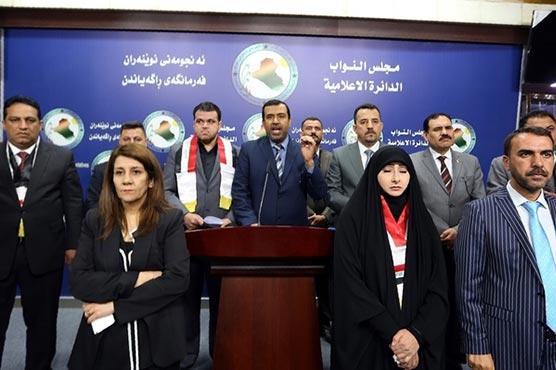 Juburi insists the vote to sack him and his deputies was invalid.

BAGHDAD (AFP) - Embattled Iraqi parliament speaker Salim al-Juburi said Tuesday parliament sessions would be suspended "until further notice" after a week of turmoil during which lawmakers brawled and sought to sack him.

Some MPs voted last week to remove Juburi and elected Adnan al-Janabi as his interim replacement, meaning there are now two claimants to the speakership.

Juburi insists the vote to sack him and his deputies was invalid because the session lacked the necessary quorum, but his opponents are seeking to move ahead with selecting replacements.

"I announce the suspension of sessions... of the Iraqi parliament until further notice," Juburi said in a statement.

But Janabi has called for a session to be held on Thursday, so MPs may still meet without Juburi s leadership.

Juburi s decision was taken to "preserve the reputation of parliament" and prevent it from being "a place for conflict", he said.

There has been plenty of conflict in parliament over the past week: lawmakers held an overnight sit-in and threw punches in the chamber, as well as seeking to sack Juburi.

The turmoil began with disagreement over two proposed cabinet line-ups presented by Prime Minister Haider al-Abadi, but shifted to calls for Juburi to go.

Abadi has sought to replace the cabinet of party-affiliated ministers with a government of technocrats, but has faced significant opposition from powerful political parties that rely on control of ministries for patronage and funds.

Both the United States and the United Nations have warned that the political crisis could distract from efforts to combat the Islamic State (IS) terrorist group, which overran large areas of Iraq in 2014.

Terrorism in Pakistan: An ideological conflict or a strategic monopoly?