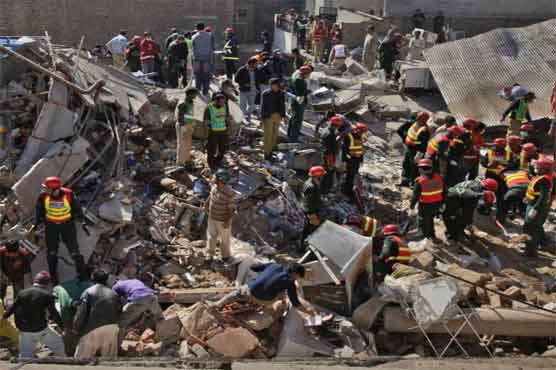 The death toll rose rapidly from an initial count of 20 after rescuers recovered dozens more bodies from the debris of the destroyed restaurant and neighbouring structures in the town of Petlawad in Jhabua district.

"There are 104 confirmed deaths at the moment. Eighty-two postmortems have been carried out and 22 are still pending," M. L. Gond, an inspector in charge of Jhabua s police control room, told AFP by phone.

"My information is that 60 people are injured, but the number could be higher," he said.

Arun Kumar Sharma, chief medical officer of Jhabua district, told AFP by phone from the local hospital that about 100 people were injured in the blast, 20 of them seriously.

The blast occurred at around 8:30 am local time (0300 GMT) at the restaurant where many office workers and schoolchildren were having breakfast, senior district police official Seema Alava said.

Television footage showed scores of people and rescue workers using their bare hands to shift mangled heaps of steel and concrete of the ruined buildings while police cordoned off the area.

Bodies covered in dust and ash lay in the streets alongside the twisted wreckage of burned vehicles.

Authorities suspect the intensity of the explosion may have been compounded by detonators and gelatin sticks, an explosive material used in mining, being stored either in the restaurant building or the neighbouring one.

"It looks like someone had stored those explosives, the ones used in mining, in one of the buildings. But only further investigation will reveal the exact details," Alava told AFP from the site.

She added that the blast knocked down a neighbouring building and damaged several others.

Another district police official, Anurag Mishra, cited the restaurant s proximity to a busy bus stand as a reason for the high number of casualties.

Madhya Pradesh Chief Minister Shivraj Singh Chouhan took to Twitter to express his sadness at the loss of life.

"The Jhabua tragedy is heart wrenching. I offer my condolences to the families of the victims and pray for the speedy recovery of those injured," Chouhan said.

Chouhan has also ordered an inquiry into the matter.

"Extremely pained at the loss of lives due to the cylinder blast in Jhabua," Modi said.

But although reports of fatal accidents from cylinder blasts are frequent, mass casualties are unusual.