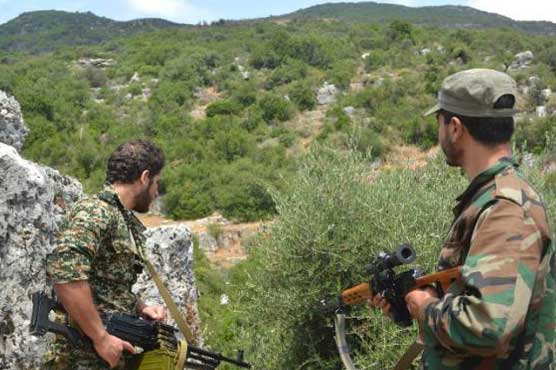 BEIRUT (AFP) - Syria s armed forces on Tuesday wrested back control of a series of key villages near the regime s coastal bastion that had been overrun by a rebel alliance, a monitor said.

The Syrian Observatory for Human Rights said government troops backed by militiamen seized four villages and other strategic locations in Sahl al-Ghab, in the central province of Hama.

Sahl al-Ghab is a large plain bordering Latakia, the heartland for the clan of President Bashar al-Assad and the Alawite sect from which he hails.

A rebel alliance including Al-Qaeda s Syria affiliate, Al-Nusra Front, had been advancing steadily in the area since the end of July, but pro-Assad forces recently began to push them back.

Abdel Rahman named the villages as Naqus, Ziyara, Tal Waset, and Mansura, and said the regime had also seized other smaller positions in the area.

"These villages are the bulwark for Jureen," the army s regional headquarters that had been a key target for rebels, Abdel Rahman said.

Clashes and heavy shelling were ongoing, particularly in the villages of Al-Qahira and Msheik.

Abdel Rahman said the battles had claimed lives on both sides, though he did not have specific details.

The regime s gains come a day after a Syrian newspaper said the army was preparing for a large pushback in Sahl al-Ghab.

Al-Watan, which is close to the government, said the army would seek to "dispel the terrorists  dreams of controlling this vital and strategic area" in an operation dubbed "The Earthquake".

The rebel alliance, which calls itself the Army of Conquest, had been within two kilometres (just over a mile) of Jureen.

Throughout August, the Army of Conquest and pro-regime forces battled in Sahl al-Ghab, each advancing slightly before the other pushed them back.

If rebels manage to capture Jureen, they will be able to advance into the mountains of Latakia and bomb several communities from Assad s Alawite sect, an offshoot of Shiite Islam.

The western coastal region of Syria has been largely spared the worst of the violence that has wracked the country since an uprising that began in March 2011.