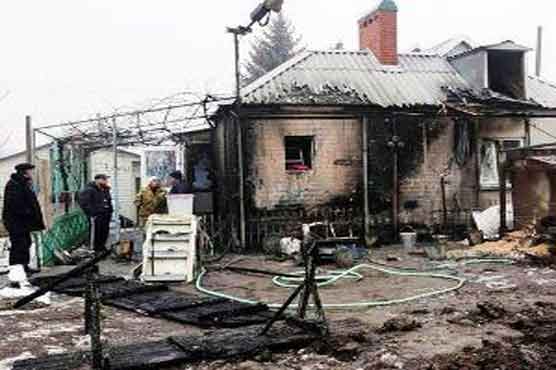 The incident further underlined the danger facing civilians as the nine-month-old war grinds on.

DONETSK, Ukraine (AFP) - Vladimir Bobryshchev was returning home early on a recent morning after a long night of work when a rocket ripped through the sky, falling straight toward his home.

He saw it hit his house, and he rushed over to save his two sons and his wife. This week, he stood in a cemetery in the rebel bastion of Donetsk burying his four-year-old boy Artyom while his wife and seven-year-old were in a hospital with serious wounds.

"My son was a terrorist like they say?" he said in anger, blaming Ukrainian forces for the rocket strike and referring to the label authorities in Kiev use for the rebels they are fighting.

His hands covered with scars, the 30-year-old metal-worker said through tears: "I tried to get them out of the debris ... But I couldn t save my son."

The incident on Sunday further underlined the danger facing civilians as the nine-month-old war in eastern Ukraine grinds on, with rebels accused of launching attacks from residential areas and forces loyal to Kiev allegedly returning fire.

A recent upsurge in violence between Ukraine s military and pro-Russian rebels allegedly supported by Moscow has been centred around the Donetsk airport northwest of the city, but shelling has moved closer in at times.

On Monday, a hospital and university were hit in Donetsk city centre, leaving at least five patients and a doctor wounded, and aid groups have issued urgent appeals to both sides to halt such attacks and counter-attacks.

An estimated 4,800 people have been killed since the fighting broke out in mid-April, many of them civilians.

"By basing troops, weaponry and other military targets in residential areas, separatists and Ukrainian government forces have failed to take all feasible precautions to protect civilians, endangering civilians in violation of the laws of war," Amnesty International said.

He needs his rabbit

The threat could even be seen at the funeral for Artyom, with two rebel vehicles armed with Grad rocket launchers passing on a road some five metres (yards) from the boy s casket.

Shortly afterwards, outgoing fire was heard, startling those at the funeral and leading to fears of a possible reprisal attack, but they pressed on with ceremony.

For Vladimir, those who fired the rocket that wrecked his home and killed his son intended to hit civilians.

"There is no military target within a kilometre all around. They targeted houses!" he shouted, calling for those responsible to be brought to justice.

In the cemetery in the Kirovskiy neighbourhood in the once-bustling industrial city under thick fog and light rain, about 10 people gathered around the boy s open casket with candles and blank faces.

Artyom s grandmother was unable to hold back her tears and cries, and she sought a way to comfort him one last time.

"He needs his rabbit," she said before placing a stuffed animal in the coffin.

Vladimir s wife, meanwhile, remained in serious condition, having lost a leg, and his seven-year-old son Mikhail may have to lose one of his eyes.

"He doesn t know yet that he no longer has a brother," the father said of his hospitalised son.

He then pulled out an apple juice and piece of candy from his pocket. Artyom had been waiting for his father to return home on the morning the rocket hit.

"It was for him," he said of the small gifts in his pocket.

I think of Peshawar martyrs before making any decision: PM