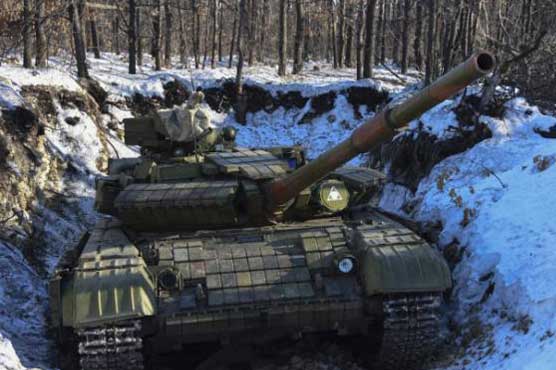 DONETSK (AFP) - Clashes between Ukraine s army and pro-Russian rebels for control of a battered airport intensified Saturday, with explosions and heavy gunfire shaking the area throughout much of the day and at least six more people killed.

The battle for Donetsk airport in eastern Ukraine saw Kiev rush reinforcements to the snowy front lines, while soldiers in the area spoke of some of the worst shelling yet in the nine-month war.

Fighting has flared in the region in recent days, with peace talks having stalled and a September truce in shreds.

"We try to hold on and to reciprocate," one Ukrainian soldier in Pisky, a few kilometres from the airport, told AFP.

"A lot of guys have already died. We have to end it all already, to stop it."

The blackened and wrecked shell of the airport has been repeatedly hit by heavy artillery in months of on-and-off clashes.

It however remains of symbolic and strategic importance, and Ukraine s military maintained that it was defending its positions despite rebel claims that they had taken control of the site.

"The situation there is really difficult," military spokesman Andriy Lysenko said in a briefing.

"There are constant attacks and attempts to attack, but the military command constantly sends reinforcements."

He said three Ukrainian soldiers had been killed and 18 others wounded over the past day, bringing the military s toll to at least nine dead since Thursday.

At least eight civilians have been reported killed over the same period, including one on Saturday when rebels were accused of firing Grad rockets in the city of Popasna in the Lugansk region, according to regional governor Hennadiy Moskal.

A rebel official in Donetsk told AFP that another two civilians were killed and five wounded in shellings that he blamed on Ukrainian forces.

One resident spoke of heavy shelling hitting near her home.

"Very strong shelling started an hour ago," said 27-year-old Oksana. "The lights went out. We can hear the shells explode somewhere nearby."

It was not clear if the new military toll included a soldier killed by a booby-trapped honey jar that exploded in the Lugansk region on Friday.

An elderly man identifying himself as a local resident in Stanicya Luganska handed soldiers at a checkpoint a three-litre jar of honey and thanked them for their service before walking away, said Moskal.

The jar later exploded, killing one soldier and seriously wounding three others in the highly unusual attack.

As fighting rocked the area around the airport on Saturday, Lysenko also alleged that Russia was increasing its military presence along the Ukraine border.

He said arms including TOS-1 flamethrowers, C300 missile systems and Smerch and Hurricane rocket launchers had been spotted near the Russian city of Rostov-on-Don close to the border and were being periodically moved into Ukraine for attacks.

Russia, under Western sanctions over its actions in Ukraine, strongly denies sending weapons and troops into the war zone despite witness claims to the contrary.

More than 4,800 people have been killed in the conflict, while talks aimed at ending the fighting have stalled.

A September truce has been frequently violated, while a peace summit between the leaders of Ukraine, Russia, Germany and France has been postponed until an unclear date.

A round of talks between a contact group with representatives of Ukraine, Russia and the Organisation for Security and Co-operation in Europe, along with rebel leaders, was due to take place on Friday in Minsk, but it too has been put off.

The UN Security Council meanwhile plans to meet next week to discuss the flareup of violence.

On Friday, President Barack Obama said the United States and Britain backed continued sanctions on Russia over its actions in Ukraine -- a tougher line than in some European capitals where support for the measures is weakening.

Ukraine s economy is also suffering badly as it continues to finance the war, and the ex-Soviet republic requires an estimated $15 billion from world lenders to fill funding gaps this year.