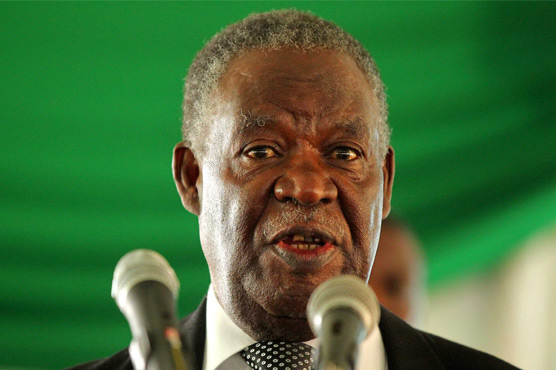 Sata had not been seen in public since returning from the UN General Assembly last month.

LUSAKA (AFP) - Zambia s government on Wednesday announced 77-year-old President Michael Sata had died in London of an unspecified illness, leaving behind questions about who will now lead the copper-rich African nation.

"It is with a heavy heart that I announce the passing on of our beloved president," government cabinet secretary Roland Msiska said in an address to the nation.

He called for Zambians to remain calm.

Sata, nicknamed "King Cobra" for his biting rhetoric, had ruled Zambia since elections in 2011.

He had long been rumoured to be seriously ill, despite fervent government denials.

Sata had not been seen in public since returning from the UN General Assembly last month, where he failed to make a scheduled speech.

He made a rare public appearance on September 19 to tell parliament: "I am not dead."

Zambia s former president Rupiah Banda told AFP he was shocked by the news of his successor s death.

"It s really sad considering we were not quite sure of how he was doing, but we have just heard about his passing on."

Sata s death prompted speculation about who may replace him before and after elections, which are expected within 90 days.

Sata flew to London just over a week ago for treatment, appointing Defence and Justice Minister Edgar Lungu as acting president.

It was not immediately clear if Lungu has now been replaced by Vice President Guy Scott, as stipulated in the Zambian constitution.

If confirmed, 70-year-old Scott -- whose parents are Scottish -- would be the first white person to lead an African country since FW de Klerk ruled apartheid South Africa.

"We went through this in the past but we maintained peace and I hope we will remain peaceful."

"He was gifted with unique, admirable abilities and strong values," he said in a statement.

Sata s supporters saw him as a no-nonsense man of action, while for critics, the former policeman, trade unionist and taxidermist was an authoritarian populist.

What is undisputed is that he seemed to revel in scorched earth politics.

Sata rode to power on the back of resentment against the Chinese resource firms that dot Zambia, describing them as "infesters".

Detractors, political foes, the media and even allies frequently came under attack from a man who earned the sobriquet "King Cobra".

His government had recently cracked down on political opponents and critical journalists who reported on his long-suspected illness and frequent "working trips" abroad, apparently for medical treatment.

In January 2014, an opposition politician was charged with defamation for calling him a potato, while in June the authorities charged three opposition activists for claiming that he was dying.