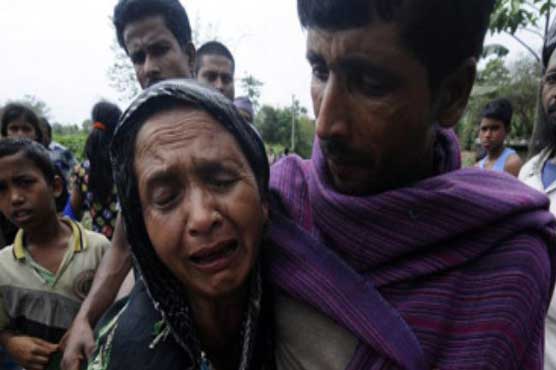 The bodies were found as authorities continued their search of two districts in the remote tea-growing state where masked gunmen last week shot dead Muslim villagers including babies as they slept.

Police have accused tribal Bodo rebels of killing the Muslims whose migrant community has been locked for years in land disputes with the indigenous group in the state that borders Bhutan and Bangladesh.

Local media have reported that Bodos attacked the Muslims as punishment for failing to vote for their candidate last month in the country s mammoth, staggered election that is drawing to a close.

"So far the death toll is put at 43. The killings were indeed barbaric with even five-month-old baby not spared," Assam Chief Minister Tarun Gogoi told reporters from the worst-hit Narayanguri village.

"It is unfortunate that bodies are still being recovered and we have reports that 11 more people are missing," Gogoi said.

A police spokesman travelling with Gogoi said the bodies of three children and two women were the latest found in the district of Baksa, about 210 kilometres (130 miles) west of Assam s main city of Guwahati.

The death toll has climbed from at least 32 on Sunday after a series of bodies were discovered in recent days, while several people wounded in the carnage on May 1 and May 2 have also died in hospital.

Gogoi said some 15 children, aged eight months to 14, left orphaned by the bloodshed were being sent to a charity-run home in Guwahati.

Villagers broke down in tears as they recalled their terrifying ordeals, while others pleaded with officials travelling with the chief minister to help shift them to hospital for treatment.

"I saw my mother and father dying in front of me. I managed to save myself hiding under the bed as masked gunmen put bullets in my parents," 14-year-old Habiba Nessa told AFP.

Security forces have launched a massive hunt for the Bodo guerrillas blamed for the violence which has forced several thousand people to flee their homes in fear, officials have said.

The violence came during the final stretch of the general election that has seen religious and ethnic tensions flare and which Hindu nationalist hardliner Narendra Modi and his opposition party were expected to win.

Police blamed the attacks on the outlawed National Democratic Front of Bodoland, which has been demanding a separate homeland for decades, but the group has denied it was behind the violence.

Seventeen people were killed in clashes in the same region in January.