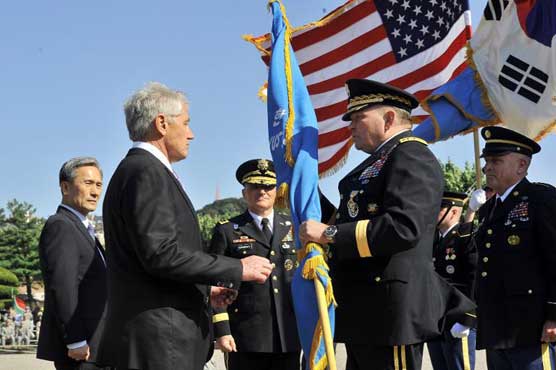 SEOUL (AFP) - North Korea on Monday lashed out at a new military pact between the South and the US aimed at guarding against potential nuclear attacks and threatened a "final destruction".

Defence chiefs of the two allies said the new "strategic framework" for dealing with "key North Korean nuclear threat scenarios" would greatly enhance their deterrence capacity in the wake of the North's third atomic test in February.

The two nations along with Japan are also to stage a massive joint naval drill near the Korean peninsula from Tuesday to Thursday involving the nuclear-powered aircraft carrier USS George Washington.

The North's Committee for Peaceful Reunification of Korea (CPK) baulked at the latest moves, describing them as "grave provocations" that would push the peninsula to the "brink of nuclear war".

"The latest military manouevres are creating a grave crisis on the peninsula -- a tinderbox where any error of judgment or accident can trigger a nuclear war," the CPK said in a statement carried by the state-run Korean Central News Agency.

"If the enemies continue to run amok in a plot against us, we will launch merciless pre-emptive attacks to bring them to a final destruction," it said.

The isolated communist state has habitually condemned the joint army drills staged south of the border and has issued threats of counter-attacks that have rarely materialised.

The North's atomic test in February -- its most powerful to date -- triggered months of heightened military tension on the peninsula.

Pyongyang threatened pre-emptive nuclear strikes against Seoul and Washington, while the Pentagon responded by deploying nuclear-capable B2 stealth bombers during past joint military exercises with Seoul.

Tensions have eased somewhat in recent months after the North changed tack to make a series of conciliatory gestures to Seoul, including an agreement to hold family reunions for those separated during the Korean War.

But acute concerns remain over the North's nuclear programme, with a US think tank saying last week that Pyongyang has clearly restarted an ageing plutonium reactor.

The latest mood of rapprochement has also showed signs of losing momentum after the North late last month abruptly delayed the family reunion only days before the much-anticipated event.

The North's top military body on Friday launched blistering personal attacks on the South's President Park Geun-Hye, calling her an "imbecile" for urging Pyongyang to give up its nuclear arsenal.