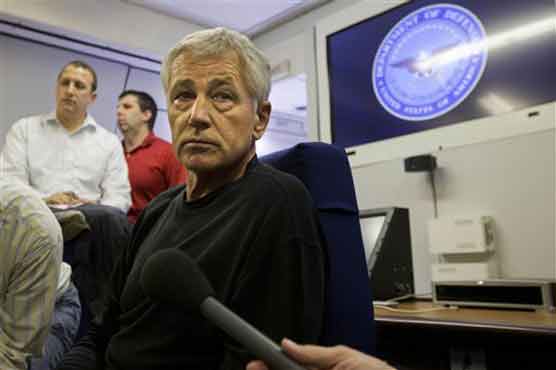 SEOUL (AP) - Amid escalating threats from North Korea, US and South Korean defense officials will meet over the next few days and discuss whether to extend America s wartime control over the South s armed forces, 60 years after a truce ended the Korean War.

Defense Secretary Chuck Hagel flew to Seoul on Sunday, and said there will be conversations about the possible extension of the 2015 deadline, but likely no decisions will be made.

"We re constantly re-evaluating each of our roles," Hagel told reporters traveling with him. "That does not at all subtract from, or in any way weaken, our commitment the United States  commitment to the treaty obligations that we have and continue to have with the South Koreans."

US officials have acknowledged that the South Koreans have informally expressed an interest in delaying the deadline when Seoul is supposed to assume wartime control of the forces that would defend the country in the event of an attack by North Korea.

Defense officials said they expect to have discussions about it with the South Koreans that will help map out the way ahead.

Officials said that South Korea s military capabilities have continued to improve, including its ability to communicate and coordinate with the US on missile defense, particularly with American Navy ships deployed to the region.

But the South still needs to strengthen a number of military and intelligence capabilities, including surveillance and reconnaissance as well as its missiles

US control of the forces is a holdover from the Korean War, and America has been trying for years to build South Korea s capabilities. But it has proved difficult to wean the South off its dependence on the U.S. military, particularly as the threat from North Korea has escalated.

Earlier this year, Pyongyang conducted another nuclear test in defiance of UN Security Council resolutions. The detonation at a remote underground site was seen as a key step toward the North s goal of building a bomb small enough to fit on a long-range missile capable of striking the US.

And, earlier this month a US research institute said that recent satellite images appeared to show that North Korea was restarting its plutonium reactor at the Nyongbyon nuclear facility.

That facility was closed in 2007 under the terms of the six-nation disarmament agreement.

On Friday, South Korean Foreign Minister Yun Byung-se urged the UN General Assembly to make a united effort against North Korea s nuclear program, as it has against the use of chemical weapons in Syria.

Bonnie Glaser, an Asia expert at the Center for Strategic and International Studies, said that it s time to complete the transfer of wartime control to South Korea.

"This is not going to in any way weaken the ability of US forces to work with South Korean forces," she said. "I think you could argue it could strengthen it. It would make it more similar to the kind of arrangement that we have between American and Japan forces."

She said that the recent saber-rattling by Pyongyang, including the nuclear test, represent more of an escalation in the threat to the U.S. than to South Korea.

The North has long had highly capable short-range missiles that can hit South Korea.

Hagel will spend several days in South Korea, then head to Japan, where he and Secretary of State John Kerry will meet with Japanese leaders. This is Hagel s third trip to Asia this year.