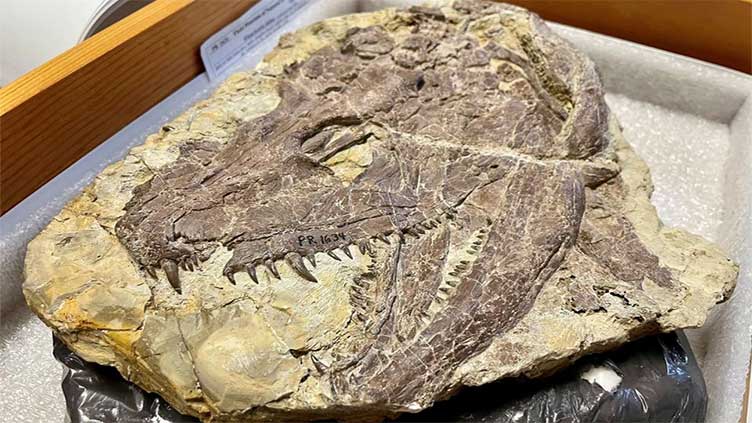 WASHINGTON, (Reuters) - It looked like a cross between a crocodile and a salamander - and definitely was not an animal to be messed with. Long before the dinosaurs or even the advent of the earliest true amphibians and reptiles, a unique creature called Whatcheeria was a genuine apex predator.

New research is providing a deeper understanding of Whatcheeria, which lived roughly 330 million years ago during the Carboniferous period and arose during a time of evolutionary experimentation and innovation that unfolded in the tens of millions of years after vertebrates first conquered the land.

After a close examination of its fossilized bones, scientists were surprised to find that Whatcheeria did not follow a slow-and-steady growth pattern during its life akin to many modern reptiles and amphibians but rather grew quickly while young, like birds and mammals.

Whatcheeria was an early tetrapod, as the first land vertebrates - animals with backbones - were known. These were the predecessors to today’s land vertebrates - amphibians, reptiles, birds and mammals. Spending much of its time in lakes and rivers, Whatcheeria reached about 7 feet (2 meters) long, making it the biggest bully on the block.

"Whatcheeria was not a slow and sluggish oversized amphibian. It was this active predator that grew extraordinarily rapidly in its juvenile phase of life," said paleontologist Megan Whitney of Loyola University in Chicago, lead author of the research published in the journal Communications Biology.

Whatcheeria is known from nearly 400 fossils unearthed near the small Iowa town of What Cheer.

"Whatcheeria is characterized by a large skull that’s loaded with teeth and robust, chunky limbs," Whitney said. "It was the apex predator of its environment that included different kinds of ancient fish and sharks as well as other, smaller early tetrapods."

"It’s a wonderfully weird beast," added study co-author Ben Otoo, a doctoral student in paleontology at the University of Chicago’s Committee on Evolutionary Biology and the Field Museum, which holds the Whatcheeria remains in its collection. "You’d probably think it was a caiman if you saw it, or maybe a big salamander. It didn’t have scales and had a tall and narrow skull instead of a flat one."

Unlike many early tetrapods - and most extinct species of any animal - fossils of Whatcheeria have been recovered from different points in the animal’s life cycle.

"Bones act as storybooks, recording information about animals while they’re alive. And one of the important pieces of information that is recorded in bone is how fast the animal is growing," Whitney said.

"A key finding of this research is that we identified fast-growing bone in juveniles of Whatcheeria. This is important because it indicates that the growth strategy of this animal was similar to ours: grow fast while young and then slow down growth as you become an adult," Whitney said.

"While this seems pretty straightforward, this strategy has long been considered a specialized trait for warm-blooded animals like mammals and birds. However, what we were able to show here is that this strategy was used even at the earliest stages of our evolutionary history," Whitney added.

"We think Whatcheeria could have employed a range of hunting techniques," Whitney said. "It certainly could have been an ambush predator and used its robust limbs to help propel an attack on both aquatic and terrestrial prey. It’s hard to say for sure how much time it spent on land versus in the water. However, what we can say is that its anatomy could have allowed for the animal to walk on land."

The early tetrapods went extinct as the first true amphibians and reptiles asserted their dominance.

"I think that Whatcheeria is a really nice demonstration that evolution isn’t linear," Otoo said.