Cows on the lam sow havoc, and hilarity, in Canada 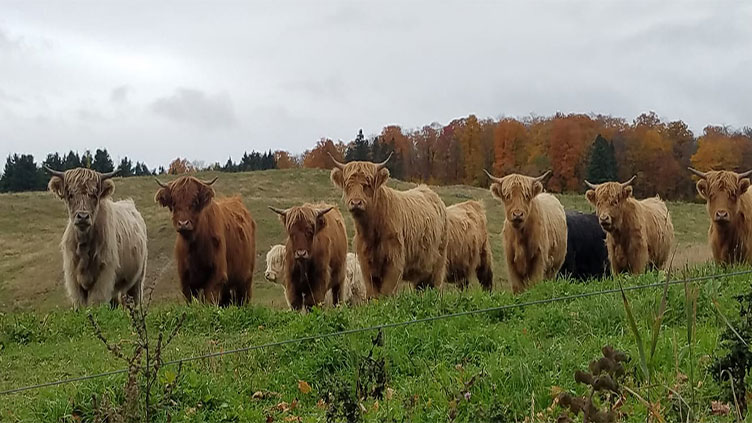 Cows on the lam sow havoc, and hilarity, in Canada

A fugitive herd of cows is wreaking havoc in Canada's Quebec province.

MONTREAL (AFP) - Not a day goes by without a news flash on their antics: a fugitive herd of cows is wreaking havoc in Canada s Quebec province, evading even rodeo cowboys and sparking hilarity with their bolt for freedom.

It all started over the summer when the 20-or-so cows saw an opportunity in a damaged fence at a farm in Saint-Barnabe, about a 1.5 hour drive north of Montreal, to make a run for it.

They darted for a dense forest in the neighboring municipality of Saint-Severe, finding refuge from would-be captors unable to follow them in.

"During the day they stay hidden in the woods but as soon as dusk arrives, in the evening, they go out, they approach buildings, open bags, try to eat crops," explained municipal worker Marie-Andree Cadorette.

So far, the cows have benefited from confusion among authorities over whose jurisdiction stray cattle fall under.

After several months, "the police told me that we could slaughter the cows. I replied, who is  we ? On a daily basis, the municipality is me alone in my office. I m in a dress and high heels, I m not going out hunting for cows," Cadorette said with a laugh in a Radio-Canada interview that has been shared widely on social media.

As the herd was made up of young cows that had not experienced much domestication and had therefore become almost feral in their freedom, the municipality then decided to call in cowboys from a nearby rodeo.

"We managed to corral the herd of cows but it went wrong when we crossed a large field of corn which had not been threshed yet and we lost them in the corn stalks," said Sylvain Bourgeois, head of the western rodeo festival that directed the operation.

Stepped up media coverage of the cows in recent days has prompted the Quebec agriculture ministry to finally intervene in what it described as a "complex and unprecedented situation."

The new strategy involves luring the animals out with food and then capturing them.

Their owner hopes that this latest attempt will convince the cows to end their dalliance with freedom and come home, especially since winter is around the corner, bringing snow and cold.