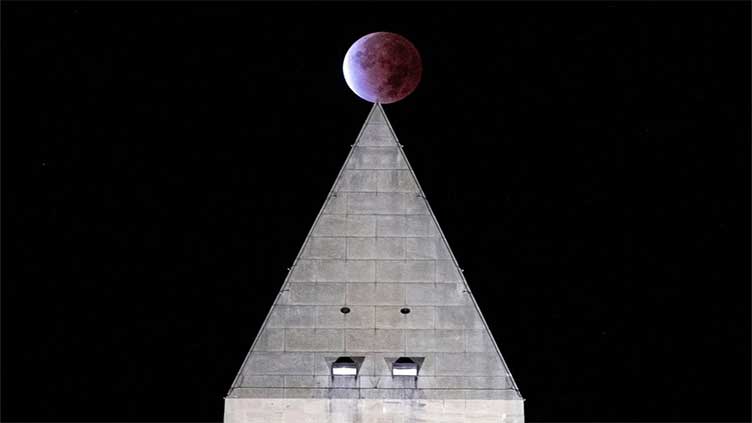 (Reuters) - Nighttime skywatchers from East Asia to North America will be treated to the rare spectacle of a "Beaver blood moon" on Tuesday, weather permitting, as the Earth, moon and sun align to produce a total lunar eclipse for the last time until 2025.

Here are some key facts about the upcoming celestial display, unfolding in an exceedingly unusual concurrence with Election Day in the United States, and about lunar eclipses in general.

A total lunar eclipse occurs when the Earth casts its shadow completely over a full moon, blocking reflection of all direct sunlight from the lunar orb and dimming the color of the moon to a reddish hue, hence the term "blood moon."

This is only possible when the orbits of the Earth, moon and sun align so that the moon is directly behind Earth relative to the sun. Otherwise, the moon passes above or below Earth’s shadow because its orbit around Earth is usually tilted relative to Earth’s orbit about the sun.

The reddish appearance of the lunar surface - the moon does not entirely disappear from view - is caused by rays of sunlight around the outer edge of the eclipse shadow, or umbra, being filtered and refracted as it passes through Earth’s atmosphere, bathing the moon indirectly in a dim copper glow.

The degree of redness depends on atmospheric conditions that vary with levels of air pollution, dust storms, wildfire smoke and even volcanic ash.

Total lunar eclipses occur, on average, about once every year and a half, according to NASA. But the interval varies. Tuesday’s event will mark the second blood moon this year, following one in mid-May. The next one is not expected until March 14, 2025.

Tuesday’s eclipse will be visible across eastern Asia, Australia, the Pacific and North America. Skywatchers in Asia and Australia will see it with their evening moonrise, while the spectacle will play out for observers in North America in the early morning hours before the moon sets.

It will be visible to the naked eye wherever skies are clear in those regions.

HOW LONG IT LASTS

The entire eclipse will unfold over a period of nearly six hours as the moon gradually edges into the Earth’s paler, outer shadow, its "penumbra," then enters the Earth’s darker, inner shadow, or "umbra," before reaching totality and eventually emerging from the other side.

On the West Coast of the United States, the whole display will run from 12:01 a.m. PST until just before 6 a.m., with the total eclipse phase lasting about 90 minutes, peaking at 3 a.m.

Tuesday’s event will coincide with the "Beaver moon," a moniker for November’s full moon adopted by the Old Farmer’s Almanac supposedly from Algonquian languages once spoken by Native Americans in the New England territory. When combined with the phenomena of a total lunar eclipse, it is widely referred to as a "Beaver blood moon" in the United States.