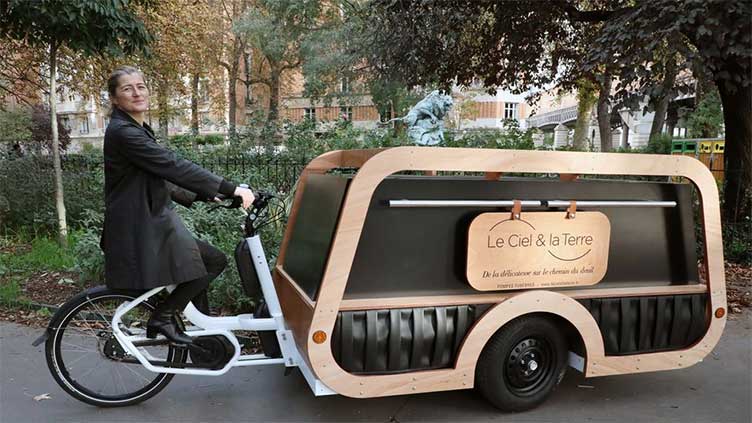 PARIS, (Reuters) - Undertaker Isabelle Plumereau cycled around Paris on a recent autumn day with a bicycle hearse that she hopes will soon bring a new "green" way of conducting funerals to the French capital.

Quieter, environmentally conscious burials are a small but growing trend, and Plumereau says transporting the coffin with a specially designed cargo bike can confer a more down to earth pace to a funeral.

While bicycle hearses already exist in a few other countries, including Switzerland and Denmark, hers would be a first in France, according to the 51-year old undertaker.

"For me, it makes sense to combine the bicycle and the hearse because, when we talk about bicycles in Paris, we are talking about soft mobility and if there is one day when we need softness it’s the day when we accompany someone we love to their final resting place," Plumereau said.

"Everyone walks at the same pace (behind a bicycle hearse)and we hear each other, we hear the sounds of nature around us, the wind in the trees, the birds. In my view this is the best way to console yourself."

Plumereau said she already had official authorisations to use the bicycle hearse - after adapting it to French regulations - and was just waiting for the green light from her insurer to get started.

People passing by gazed at the black and lightwood bicycle hearse, some of them intrigued, not all convinced.

"It’s quite innovative," 49-year-old Elyes Meziou said, before adding that he wouldn’t want it for his own funeral.