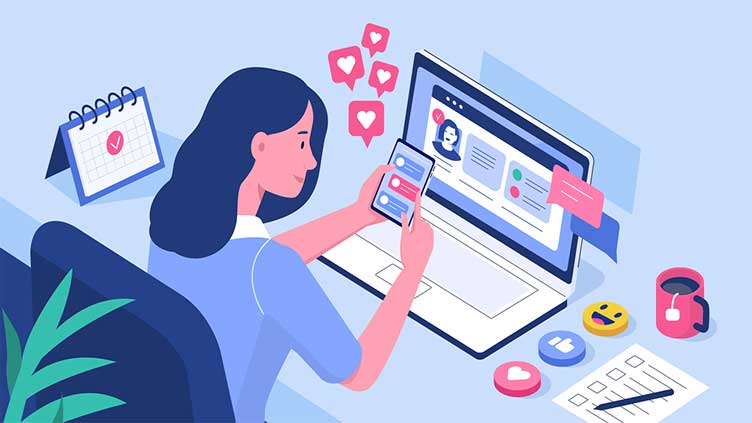 NEW YORK (AP) — Larry, a 71-year-old retired insurance broker and Donald Trump fan from Alabama, wouldn’t be likely to run into the liberal Emma, a 25-year-old graphic designer from New York City, on social media — even if they were both real.

Each is a figment of BBC reporter Marianna Spring’s imagination. She created five fake Americans and opened social media accounts for them, part of an attempt to illustrate how disinformation spreads on sites like Facebook, Twitter and TikTok despite efforts to stop it, and how that impacts American politics.

“We’re doing it with very good intentions because it’s important to understand what is going on,” Spring said. In the world of disinformation, “the U.S. is the key battleground,” she said.

Spring’s reporting has appeared on BBC’s newscasts and website, as well as the weekly podcast “Americast,” the British view of news from the United States. She began the project in August with the midterm election campaign in mind but hopes to keep it going through 2024.

Spring worked with the Pew Research Center in the U.S. to set up five archetypes. Besides the very conservative Larry and very liberal Emma, there’s Britney, a more populist conservative from Texas; Gabriela, a largely apolitical independent from Miami; and Michael, a Black teacher from Milwaukee who’s a moderate Democrat.

Spring, who uses five different phones labeled with each name, tends to the accounts to fill out their “personalities.” For instance, Emma is a lesbian who follows LGBTQ groups, is an atheist, takes an active interest in women’s issues and abortion rights, supports the legalization of marijuana and follows The New York Times and NPR.

These “traits” are the bait, essentially, to see how the social media companies’ algorithms kick in and what material is sent their way.

Through what she followed and liked, Britney was revealed as anti-vax and critical of big business, so she has been sent into several rabbit holes, Spring said. The account has received material, some with violent rhetoric, from groups falsely claiming Donald Trump won the 2020 election. She’s also been invited to join in with people who claim the Mar-a-Lago raid was “proof” Trump won and the state was out to get him, and groups that support conspiracy theorist Alex Jones.

Despite efforts by social media companies to combat disinformation, Spring said there’s still a considerable amount getting through, mostly from a far-right perspective.

Gabriela, the non-aligned Latina mom who’s mostly expressed interest in music, fashion and how to save money while shopping, doesn’t follow political groups. But it’s far more likely that Republican-aligned material will show up in her feed.

“The best thing you can do is understand how this works,” Spring said. “It makes us more aware of how we’re being targeted.”

Most major social media companies prohibit impersonator accounts. Violators can be kicked off for creating them, although many evade the rules.

Journalists have used several approaches to probe how the tech giants operate. For a story last year, the Wall Street Journal created more than 100 automated accounts to see how TikTok steered users in different directions. The nonprofit newsroom the Markup set up a panel of 1,200 people who agreed to have their web browsers studied for details on how Facebook and YouTube operated.

“My job is to investigate misinformation and I’m setting up fake accounts,” Spring said. “The irony is not lost on me.”

She’s obviously creative, said Aly Colon, a journalism ethics professor at Washington & Lee University. But what Spring called ironic disturbs him and other experts who believe there are above-board ways to report on this issue.

“By creating these false identities, she violates what I believe is a fairly clear ethical standard in journalism,” said Bob Steele, retired ethics expert for the Poynter Institute. “We should not pretend that we are someone other than ourselves, with very few exceptions.”

Spring said she believes the level of public interest in how these social media companies operate outweighs the deception involved.

The BBC said the investigation was created in accordance with its strict editorial guidelines.

“We take ethics extremely seriously and numerous processes are in place to ensure that our activity does not affect anyone else,” the network said. “Our coverage is transparent and clearly states that the investigation does not offer exhaustive insight into what every U.S. voter could be seeing on social media, but instead provides a snapshot of the important issues associated with the spread of online disinformation.”

The BBC experiment can be valuable, but only shows part of how algorithms work, a mystery that largely evades people outside of the tech companies, said Samuel Woolley, director of the propaganda research lab in the Center for Media Engagement at the University of Texas.

Algorithms also take cues from comments that people make on social media or in their interactions with friends — both things that BBC’s fake Americans don’t do, he said.

“It’s like a journalist’s version of a field experiment,” Woolley said. “It’s running an experiment on a system but it’s pretty limited in its rigor.”

From Spring’s perspective, if you want to see how an influence operation works, “you need to be on the front lines.”

Since launching the five accounts, Spring said she logs on every few days to update each of them and see what they’re being fed.

“I try to make it as realistic as possible,” she said. “I have these five personalities that I have to inhabit at any given time.”