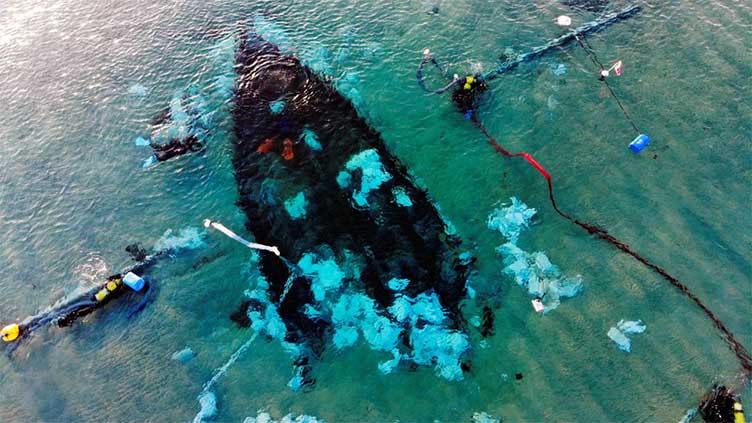 MAAGAN MICHAEL, Israel, (Reuters) - An ancient shipwreck found off the shore of Israel and loaded with cargo from all over the Mediterranean shows that traders from the West still came to port even after the Islamic conquest of the Holy Land, researchers say.

A surprise storm? An inexperienced captain? Whatever the reason, the merchant ship made from fir and walnut trees and carrying containers with delights from far-off lands sank in the shallow waters off what is today the Israeli coastal community of Maagan Michael more than 1,200 years ago.

It was around the time the largely Christian Byzantine Empire was losing its grip on this area of the eastern Mediterranean region and Islamic rule was extending its reach.

The shipwreck, dated to the 7th or 8th century AD, is evidence that trade persisted with the rest of the Mediterranean despite the religious divide, said Deborah Cvikel, a nautical archaeologist at the University of Haifa and director of the dig.

"The history books, they usually tell us that ... commerce almost stopped. There was no international commerce in the Mediterranean. We had mainly smaller vessels sailing along the coast doing cabotage," she said.

But this no longer seems to be the case.

"Here we have a large shipwreck, which we think the original ship was around 25 metres (82 feet) long, and...laden with cargo from all over the Mediterranean."

Artefacts on deck show the ship had docked in Cyprus, Egypt, maybe Turkey and perhaps as far away as the North African coast.

The excavation is backed by the Israel Science Foundation, Honor Frost Foundation and the Institute of Nautical Archaeology at Texas A&M University.

The coast of Israel is abundant with ships that sank over the millennia. The wrecks are more accessible to study than elsewhere in the Mediterranean because the sea here is shallow and the sandy bottom preserves artefacts.

A storm might shift the sands and expose a relic, which is what happened with the new discovery at Maagan Michael. Two amateur divers spotted a piece of wood sticking out from the bottom and reported it to authorities.

Eight excavation seasons later, Cvikel’s team has mapped out much of the 20-metre-long, five-metre-wide wooden skeleton that remains.

Using underwater vacuums to clear out 1.5 meters of sand, they found over 200 amphoras that still contained ingredients from the Mediterranean diet, like fish sauce, and a variety of olives, dates and figs.

There were sailing tools like ropes and personal items such as wooden combs, as well as animals, including the remains of beetles and six rats.

"You have to be very attentive because some of the remains, like fish bones, or rat bones, or olive pits, they are so tiny that it could be lost in a split second," Cvikel said.

Some of the cargo bore symbols of the Christian Byzantine church and others had writing in Arabic.

Researchers hope to find a hall to display the ship in its entirety to the public, otherwise they will cover it with sand and leave it at the sea bottom with the countless other wrecks.