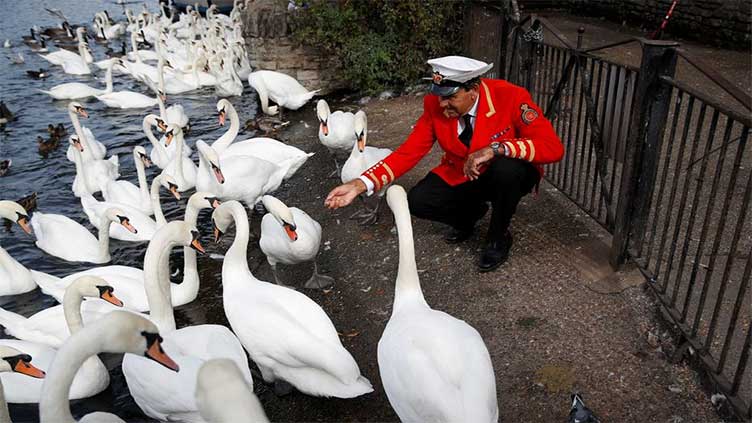 WINDSOR, (Reuters) - Swans swimming along the bends of the River Thames and delighting visitors on riverbanks across Britain have a new owner.

On the death of his mother Queen Elizabeth, Britain’s new monarch King Charles has inherited many of the country’s swans.

"The king has the right to claim any swan swimming in open waters, unmarked, if he so wishes," David Barber, who worked for Queen Elizabeth for some 30 years as her swan marker, told Reuters on Monday.

"Not all the swans belong to the king. But if he wishes to claim them, he can, by the royal prerogative," said Barber, now the king’s swan marker. He declined to estimate the number of swans owned by the monarch.

The ownership of the swans dates back to medieval times, when the birds were considered a delicacy.

"Swans then were an extremely important food source and served up at banquets and feasts, really for the wealthy," said Barber.

"As time went on, different people owned swans. The crown gave them the right to own them. And they had the young cygnets and they would fatten them up for the Christmas feasts. Of course, today swans are no longer eaten, and it’s all a conservation and education exercise," said Barber.

The monarch shares ownership of the elegant white mute swans with ancient trade associations, whose swans have their own marks.

Over his 30 years as the monarch’s swan marker, Barber met the Queen several times at public and unofficial events.

Barber, who wears a scarlet coat and a swan feather in his hat, was personally presented with the Royal Victorian Order by the Queen in 2014.

"She was a very, very lovely person. You could get on with her very well. And she took a grand interest in all wildlife but swans as well," he said.

"He’s very keen on conservation and all this type of thing, which is absolutely brilliant for us as well. So hopefully he will take a nice interest in the swan population. That will help us do our job."