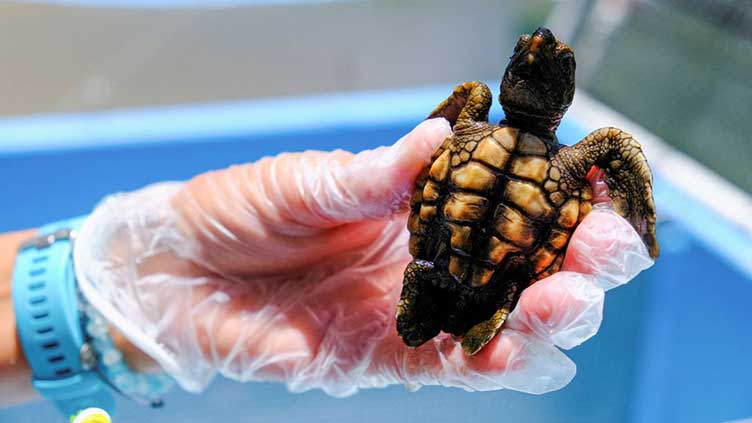 MARATHON, (Reuters) - Florida’s sea turtles are grappling with a gender imbalance made worse by climate change. Recent heat waves have caused the sand on some beaches to get so hot that nearly every turtle born was female.

"The frightening thing is the last four summers in Florida have been the hottest summers on record," said Bette Zirkelbach, manager of the Turtle Hospital in Marathon, a city in the Florida Keys, a string of tropical islands stretching from the southern end of the state.

"Scientists that are studying sea turtle hatchlings and eggs have found no boy sea turtles, so only female sea turtles for the past four years," Zirkelbach said, whose turtle center has operated since 1986.

When a female turtle digs a nest on a beach, the temperature of the sand determines the gender of the hatchlings. Zirkelbach said an Australian study showed similar statistics - "99% of new sea turtle babies are female."

Instead of determining sex during fertilization, the sex of sea turtles and alligators depends on the temperature of developing eggs, according to the National Oceanographic Atmospheric Administration (NOAA).

If a turtle’s eggs incubate below 81.86 Fahrenheit (27.7 Celsius), the turtle hatchlings will be male, whereas if they incubate above 88.8 F (31C), they will be female, according to NOAA’S National Ocean Service website.

"Over the years, you’re going to see a sharp decline in their population because we just don’t have the genetic diversity," said Melissa Rosales Rodriguez, a sea turtle keeper at the recently opened a turtle hospital at the Miami Zoo. "We don’t have the male-to-female ratio needed in order to be able to have successful breeding sessions."

The two turtle hospitals are also battling tumors in turtles known as fibropapillomatosis, also known as FP. These tumors are contagious to other turtles and can cause death if not treated.

With climate affecting the future of turtles and the disease being so widespread, Zirkelbach sees the need to save every turtle she can and open more rehab centers.

"The Turtle Hospital was the first. But, sadly and fortunately, there’s a need all throughout Florida."