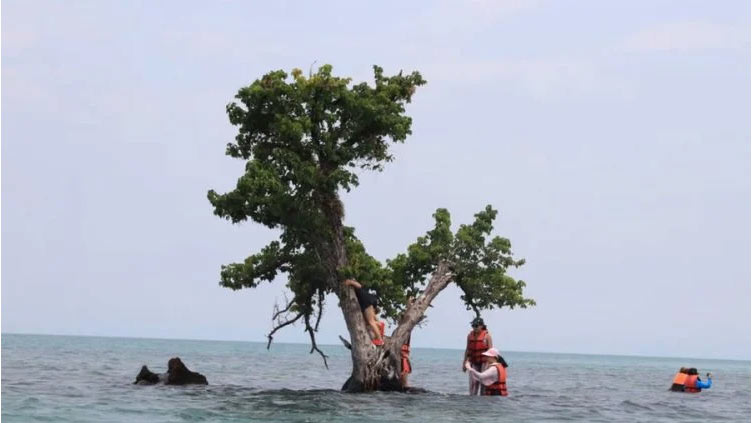 (Web Desk) - Thailand’s “loneliest tree”, a solitary tree growing on a rocky islet only a few meters in diameter, is being seriously threatened by hoards of tourists desperate to get a selfie with it.

The small patch of land located just off the country’s eastern coast, in Trat Province, has been dubbed ‘Koh Khai Hua Roh’ because it looks similar to the island featured in drawings of funny scenes involving a man and a woman trapped on an island in the popular Khai Hua Roh (Selling Laughter) comic. The uninhabited islet is quite a sight to behold, as it is home to a solitary taban tree (Xylocarpus rumphii) that clings to life despite being surrounded by salt water. Unfortunately, the tree’s popularity might just be the death of it.

On Tuesday, the Koh Mak Tambon Administrative Organisation led a team of Thai reporters to Koh Khai Hua Roh in order to observe the country’s loneliest tree. They knew that photos of the solitary tree shared on social media had been attracting an increasing number of tourists to the island, but they had no idea how much damage that could produce.

According to The Nation, both the islet and the tree have been badly damaged by tourists. Several small branches of the tree were found broken off, the tree’s exposed roots appeared to have been stomped on to the point where the outer cover has peeled off, and the trunk appears to be tilting more than it did a few years back.

Koh Khai Hua Roh islet is so tiny that it can only accommodate up to five people at a time, but local authorities admit that selfie-addicted tourists sometimes flock there in much greater numbers, with some even climbing the fragile tree.

The Koh Mak Tambon Administrative Organisation plans to kickstart an educational campaign to hopefully teach people to conserve iconic landmarks like Thailand’s loneliest trees. It also plans to take more drastic actions, like restricting the number of tourists allowed to visit the islet and making the islet only accessible in certain seasons.