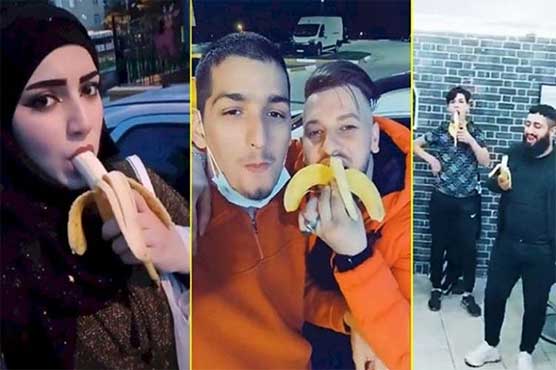 ANKARA (Web Desk) – After becoming viral ‘controversial banana video’, the Turkish government announced on Wednesday that it has arrested and opened deportation proceedings against at least seven Syrian migrants.

It is noteworthy here that seven Syrian migrants in Turkey were accused of eating bananas in a ‘provocative’ way as part of a TikTok challenge.

Al-Monitor reported that the challenge, which Syrians across the globe have participated in, was inspired by a viral video of a Turkish man complaining he could no longer afford bananas. He went on to claim that Syrian refugees could buy "kilos" of the fruit.

The video was a reference to a false rumor that Syrian refugees are living in luxury off taxpayers  money amid a crumbling Turkish economy, according to The Washington Post.

In reality, research by the Centre for Economic Policy Research shows, 45% of Syrian refugees in Turkey live in poverty and 14% live in extreme poverty.

Syrians, not only those in Turkey, shared mocking videos of them eating bananas in response.

One video, initially published on TikTok but later shared on Twitter, shows a group of migrants chuckling while they eat the fruit.

On Thursday, per The Washington Post, local media reported that immigration authorities had detained 11 Syrians involved in the TikTok trend.

They were charged with "inciting or humiliating the [Turkish] people with hatred and hostility," The Washington Post said.

Turkey is home to more than 3.6 million Syrians, who constitute the vast majority of the 4 million refugees and asylum seekers living in the country, according to The World Bank.

A 2019 study by the Turkish-German Uni­versity s Migration and Integration Research Center found that 72% of Turks believe that Syrian refugees will harm Turkey s sociocultural structure, and 74% think that public services will either deteriorate or diminish because of the refugees.