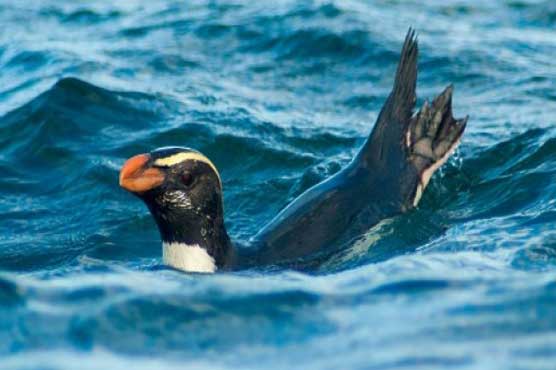 Penguins, universally adored and the stars of cartoons, are actually not well studied.

WASHINGTON (AFP) - Each year in December, penguins with long blonde eyebrows swim away from the shores of New Zealand for a two-month marathon swim halfway to Antarctica and back.

The breathtaking distance was recorded by researchers, who for the first time managed to track the birds.

Penguins, universally adored and the stars of cartoons, are actually not well studied.

One third of all penguin species live in New Zealand, where they are part of the landscape, mostly in the wilder south. Nevertheless most penguin species are considered vulnerable or endangered.

Until now it was unclear where one penguin species -- the Fiordland crested penguin (Eudyptes pachyrhynchus) -- migrated each year in search of food.

Zoologists assumed that they stayed near the coast. To find out, researchers with the Tawaki Project -- which uses the bird’s local name -- attached satellite tracking tags to 20 penguins and followed their migration daily.

"My first reaction was there’s something wrong with the data," said Thomas Mattern, a research fellow in Department of Zoology, University of Otago, New Zealand and the project director.

"Then I was just puzzled, I was completely flabbergasted -- where are they going, when will they stop?"

The penguins swam halfway to Antarctica, in areas where the warm northern waters collide with the cold waters of the south. Then they swam back New Zealand.

The complete data relates to only five animals, because the tags seem to have detached from the 15 others being tracked during their trip.

This new information confirms that penguins are among the most extraordinary vertebrate swimmers on the planet.

According to Mattern, the Russians had even studied the hydrodynamics of penguin feathers to mimic it for their submarines.

The penguin study was published Wednesday in the scientific journal PLOS One.

Researchers had a tough time finding funding for their project. Each tag costs between $1,500 and $2,000. And according to Mattern, research like this "has completely fallen off of fashion."

"If you seek academic funding, it has to be these days a topic that is en vogue, be it ancient DNA or microbiology," Mattern said.

"Field studies that conduct baseline research are often considered to be too descriptive and boring."

Instead, non-governmental organizations and the public helped fund the research.

Why focus on penguin migration in the first place?

"Penguins are seabirds, they spend up to 80 percent of their life out in the ocean, and we have not the faintest idea of what they do there," Mattern said.

While the birds are suspected to be in decline, "in order to do something about that, you have to know what is affecting the species."

The warming of the oceans, tourism and fishing probably affects the penguins, but effects on their lives still need to be studied scientifically.

"Penguins are in trouble around the globe, and mostly it’s because there’s problems in changes in the ocean," said P. Dee Boersma, a biologist at the University of Washington, Seattle, and an expert in South American penguins.

Boersma, who did not participate in the project, noted that the warming climate has not been good for penguins.

"The other big problem is the competition with fisheries," Boersma said.

African penguins used to number in the millions, now they’re down to about 30,000, she said. Why? "Because they don’t have any food to eat, because humans are taking almost all of the sardines," he said.

The unresolved mystery is why the Tawaki penguins swim so far, especially when the costal waters of New Zealand in December are swarming with fish and other food.

Scientists believe that this could be an instinct inherited from an ancestral species of penguins that lived further south, before populating New Zealand.

To answer this question further research is needed -- if possible with international funding.

"The penguins do not belong to New Zealanders or Australians, it is the whole of humanity who is responsible for it," Mattern said.