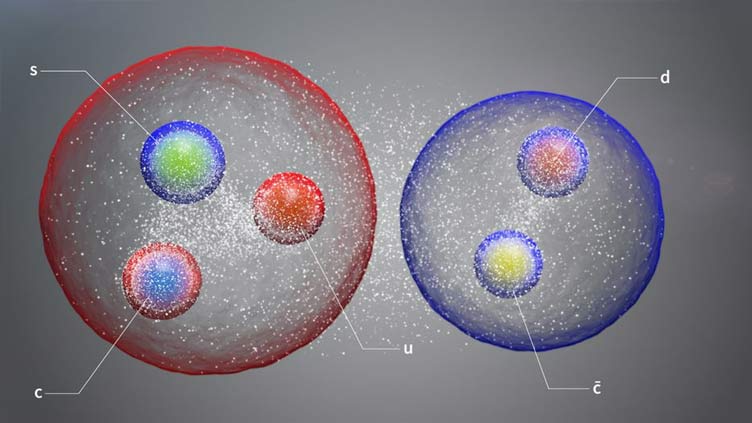 GENEVA (Reuters) - Scientists working with the Large Hadron Collider (LHC) have discovered three subatomic particles never seen before as they work to unlock the building blocks of the universe, the European nuclear research centre CERN said on Tuesday.

The 27 kilometre-long (16.8 mile) LHC at CERN is the machine that found the Higgs boson particle, which along with its linked energy field is thought to be vital to the formation of the universe after the Big Bang 13.7 billion years ago.

Now scientists at CERN say they have observed a new kind of "pentaquark" and the first-ever pair of "tetraquarks", adding three members to the list of new hadrons found at the LHC.

They will help physicists better understand how quarks bind together into composite particles.

Quarks are elementary particles that usually combine in groups of twos and threes to form hadrons such as the protons and neutrons that make up atomic nuclei.

More rarely, however, they can also combine into four-quark and five-quark particles, or tetraquarks and pentaquarks.

"The more analyses we perform, the more kinds of exotic hadrons we find," physicist Niels Tuning said in a statement.

"We’re witnessing a period of discovery similar to the 1950s, when a ‘particle zoo’ of hadrons started being discovered and ultimately led to the quark model of conventional hadrons in the 1960s. We’re creating ‘particle zoo 2.0’."