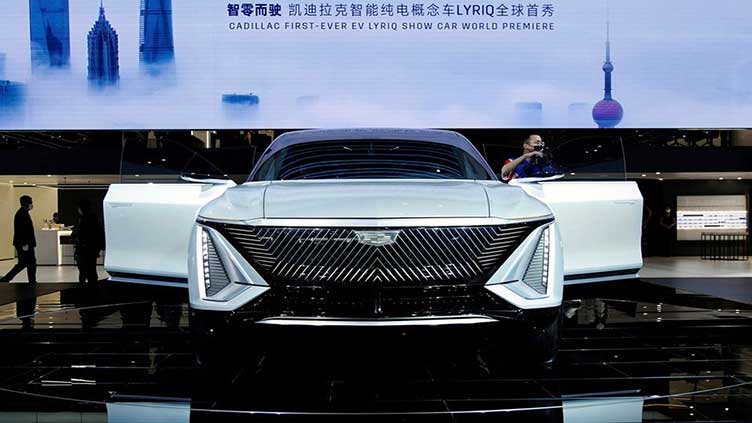 BEIJING (Reuters) - If global automakers think they can extend their dominance in China into the electric era, they may be in for a shock. Kings of the combustion age such as General Motors and Volkswagen are falling behind local players in the booming electric vehicle (EV) market in China, a country that’s key to funding and developing their electric and autonomous ambitions.

For Beijing office worker Tianna Cheng, the main dilemma when she was buying a 180,000-yuan ($27,000) Xpeng electric crossover was whether she should go for a BYD car instead, or a Nio; she did not seriously consider overseas marques.

"If I was buying a gasoline car, I may have considered foreign brands," the 29-year-old said as she drove home from work. "But I wanted an EV, and other than Tesla, I saw few foreign brands applying advanced smart technology properly."

In the first four months of 2022, the number of new energy passenger cars - pure EVs and plug-in hybrids - more than doubled from a year earlier to 1.49 million cars, according to data from the China Association of Automobile Manufacturers.
The cleaner technologies accounted for 23% of China’s passenger car market, where overall vehicle sales fell 12%, reflecting a steep decline in demand for gasoline cars.

There are no foreign brands among the top 10 automakers in the new energy vehicle (NEV) segment this year, with the notable exception of U.S. electric pioneer Tesla in third place, according to China Passenger Car Association data.

All the rest are Chinese brands, from BYD and Wuling to Chery and Xpeng. China leader BYD has sold about 390,000 EVs in the country this year, more than three times as many as global leader Tesla sold there. The top-ranked traditional carmaker is Volkswagen’s venture with FAW Group, in 15th place for EV sales.

Cheng said that overseas marques, whether the Buick Velite 7 or Volkswagen’s ID. series, failed to provide what she was looking for: an EV capable of giving her the "comfort" of having a smartphone-like experience in her vehicle.

"Foreign brands are so far from my life and lifestyle," said Cheng, whose digital assistant handles connections to apps like Alipay and Taobao and "does everything for me from opening the windows to turning on music", while her car software provides over-the-air updates.

It’s quite a reversal. Global brands have dominated in China since the 1990s, typically winning a collective 60-70% share of passenger car sales in recent years. In the first four months of 2022 they captured 52%, with their April monthly share at 43%.

Signalling the scale of the challenge facing traditional automakers, Nissan CEO Makoto Uchida told Reuters that some brands "could disappear in three to five years" in China.

"Local brands are becoming stronger," said Uchida, who was formerly Nissan’s China chief, adding that the quality of EVs from Chinese makers had improved rapidly, with advances being made in the space of months.

"There will be a lot of transformation in China and we need to carefully watch the situation," said the CEO, adding that carmakers had to be nimble in the design, development and launch of new models.

"In those aspects, if we were slow, we would be left behind."

Bill Russo, a former Chrysler executive who now heads Shanghai-based consultancy Automobility, said global brands need to turn the situation around quickly because they controlled less than 20% of China’s only growth auto market.

"Chinese brands are wining the race to EV," said Russo, adding that consumers’ shift to cars that are essentially smartphones on four wheels appeared irreversible and that traditional carmakers were having trouble keeping up.

"I think it’s a secular shift toward hi-tech," he said of the consumer demand for a "user-centric digital services experience" with a focus on interface, connectivity and apps. 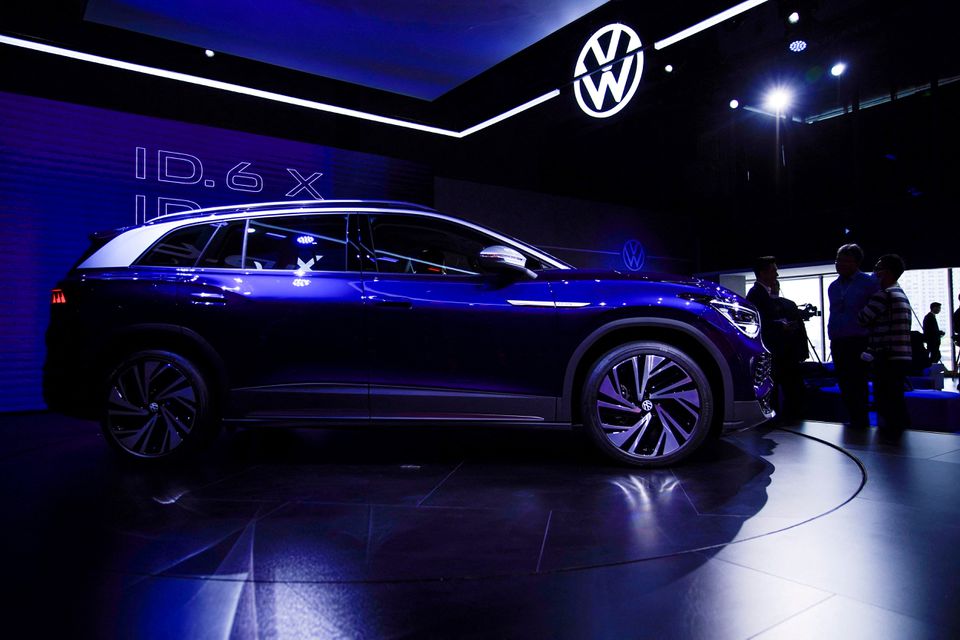 "Traditional companies are not hi-tech natives."

Volkswagen Group (VOWG_p.DE) brands, including Volkswagen, Audi, Bentley, Lamborghini, Porsche and Skoda, have led the market for much of the past two decades, alongside General Motors (GM.N) marques such as Buick, Chevrolet and Cadillac.

The two global groups had overall auto market shares of almost 13% and 12% respectively in China last year, according to LMC Automotive. Detroit giant GM also has a 44% stake in the locally controlled SAIC-GM-Wuling Auto (SGMW) venture, and includes its sales in group numbers, though SGMW does not make American brands, only Wuling and Baojun cars.

GM is now focused on winning over younger buyers in big cities that have hitherto largely snubbed its models according to two people familiar with the automaker’s business in China.

The group has announced electrification plans to spend more than $35 billion globally by 2025, including more than 30 new EVs, over 20 of them in China, starting this year with the launch of the all-electric Cadillac Lyriq crossover SUV.

The two sources said the Lyriq launch would be followed by an electric Buick SUV and a smaller, sportier electric crossover, both also planned for as early as this year.

Sales of Buicks have declined 32% over the last five years to 828,600 vehicles in 2021, while Chevrolet has shrunk more than half to 269,000 vehicles, according to LMC Automotive.

GM told Reuters it was aiming to install capacity to produce 1 million EVs a year by 2025 in China, adding that demand for the Buick Velite NEV family and Chevrolet Menlo EV "both grew significantly" in 2021 and the first three months of this year.

It said it was deploying smart technologies including hands-free driver assistance on highways, "aviation-grade" cyber security and over-the-air software updates. 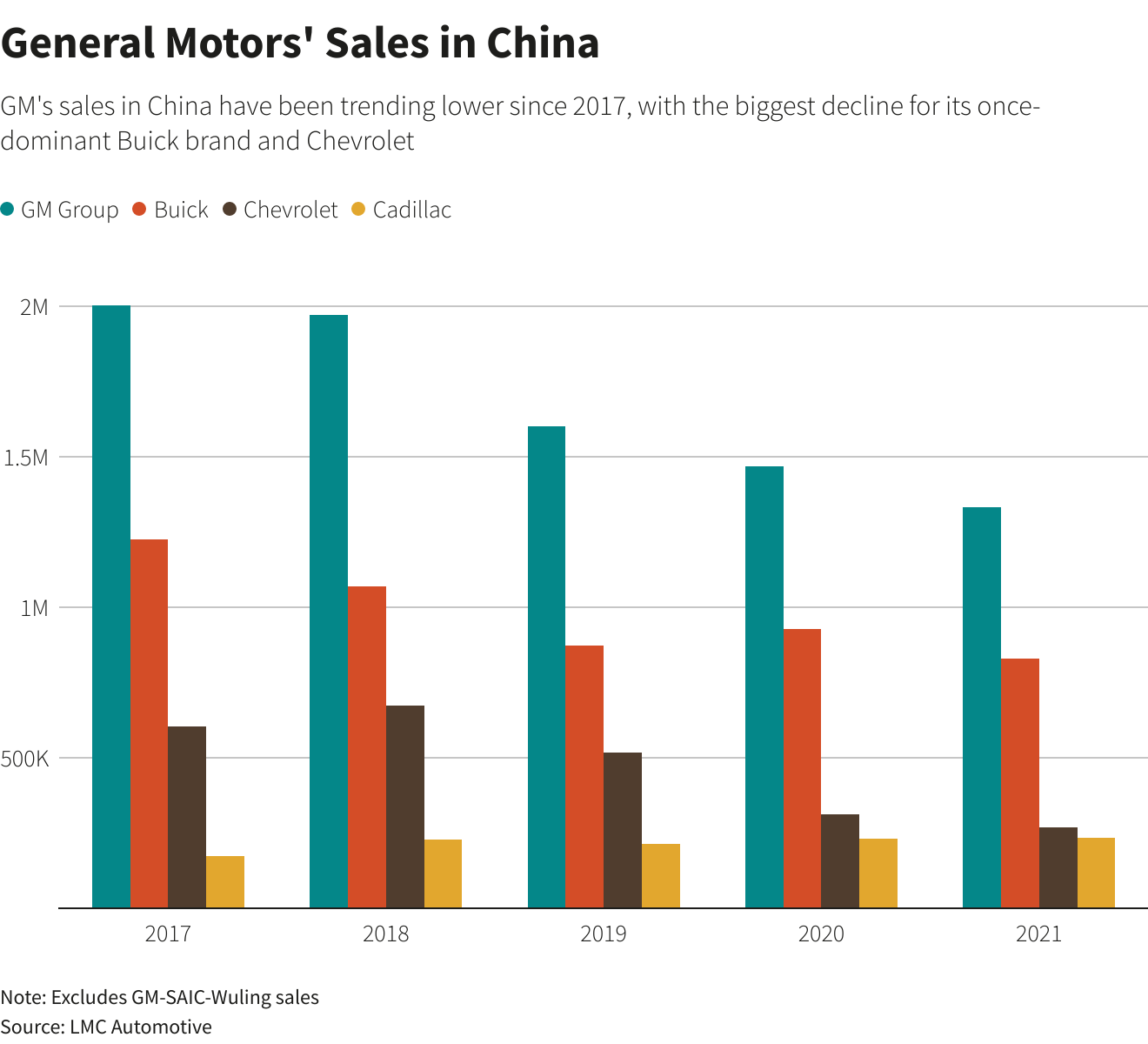 A key concern for foreign brands, according to one of the people close to GM plus a Volkswagen insider, is that their new EVs are being designed more for American and European markets in mind, with a heavier focus on performance and durability.

"Autobahn speeds? In most big cities in China traffic is so congested people can’t even drive above 60 km/h on most days," said the source close to GM, who is familiar with the automaker’s product plans and product-development processes.

Volkswagen said NEV demand in China was strongly linked to the "smart car" theme, adding that it was investing in local R&D, especially in software.

"Our strategy will enable us to achieve our ambitious targets in China. By 2030, we also want to be the market leader in e-vehicles and thus ensure that Volkswagen remains the number one in China in the future," it added.

The challenge for global brands is to find the formula to win over consumers in big cities with disposable incomes, like Cheng in Beijing and Li Huayuan, a civil engineer from Shanghai.

Li only half-heartedly considered Japanese and German brands when he bought his BYD electric sedan last year for 290,000 yuan including insurance.

"Seems to me only Tesla stands out when it comes to American brands," he said from his parked BYD car in the Sichuan provincial city of Mianyang where he’s working on a project. "The other brands don’t even look competitive to me."