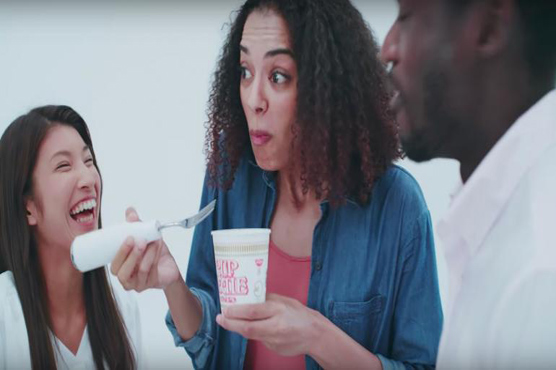 The fork masks the sound made by slurping down noodles, dubbed "noodle harassment" on social media. Photo: YouTube

(AFP) - A Japanese firm has created what it claims is a world-first "noise-cancelling" fork to mask the sound made by slurping down noodles, dubbed "noodle harassment" on social media.

Foreign visitors to Japanese noodle bars are often startled to hear the locals -- normally so polite and restrained -- noisily slurping down their noodles with lip-smacking gusto.

The tradition is supposed to show the diner s appreciation for the food but some people are becoming bothered by the noise.

Now an instant noodle producer claims to have found a solution to the problem.

Inspired by Japanese toilets, which can be programmed to play an artificial flushing noise to cover embarrassing sounds, Nissin Food Products looked at creating something similar for noodles.

The result was a giant fork -- 4.4 centimetres (1.73 inches) wide and 15.2 centimetres long -- with a sensitive microphone to detect offending slurps.

"We developed a system in which any subtle slurping sound can be detected," said the company.

When the slurp alert is triggered, the fork sends a signal to the user s mobile phone, which plays the soothing sound of flowing water to mask the offending noise.