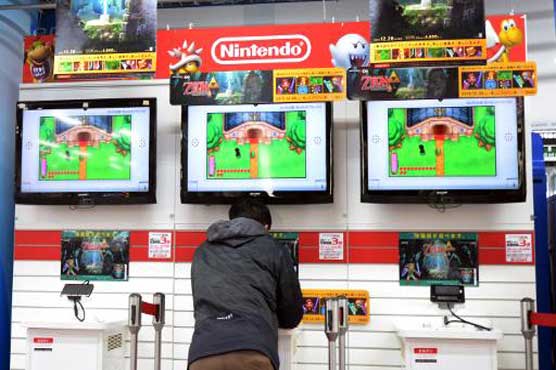 Tokyo (AFP) — There was a time when wherever Super Mario Brothers went, the gaming world followed, but an industry that has moved on in leaps and bounds since then just shrugged at the latest re-set by Nintendo on Thursday.

A vague plan to reboot a business hammered by disastrous Wii U console sales, including possibly cutting the chains that bind their popular characters to Nintendo s own devices by loosening its licensing policy, left analysts and gamers leery about the Japanese giant s prospects.

The maker of the Donkey Kong and Super Mario franchises has fallen on hard times in recent years, piling up losses as rivals Sony and Microsoft outpaced it in console sales, while all three companies fight off a trend toward cheap -- or sometimes free -- downloadable games for smartphones and other mobile devices.

"Smartphone games are really getting popular and whatever Nintendo does, people are using fewer consoles," said Hidekazu Kurihara, a 31-year-old Nintendo devotee browsing in a retro shop in Tokyo s electronics wonderland of Akihabara.

The shop sells all things Nintendo from years past, from the consoles that flung the company onto the global stage to the games whose characters became household names in the 1980s and 1990s.

"I really don t know what they should do," he said as another customer played Mario Kart on the 1990 Super Nintendo (SNES), under the watchful gaze of an oversized Super Mario, the mustachioed plumber who starred in the franchise.

After soaring by about seven percent as the Tokyo Stock Exchange opened, players jumped on the stock after a buyback was announced and it finished the day a bedraggled 4.30 percent below where it started, at 12,325 yen ($120).

Investors were less than impressed with Nintendo s insistence on sticking with its console-centric business despite slumping sales -- and calls to ride the mobile wave.

President Satoru Iwata told a Tokyo analyst conference that the "business integrating hardware and software is our strength", adding that the Kyoto-based firm was too small to make a splash in the hyper-competitive digital games sector.

Nintendo would, however, look at loosening its licensing policy to promote some of its beloved characters on smartphones and other mobile devices, he said.

"In the past we were negative about (the) licensing business. But we ll change this policy and be proactive including looking for a possible business partner," Iwata said.

For gamer Nobuo Kaneko, who was browsing in Akihabara, the problem with Nintendo is a lack of choice.

While a less sophisticated audience of a few decades ago might have put up with narrow choice and stuck with one console, gamers are more eclectic now, and the explosion in opportunities, including online, has made them much less monogamous.

"They don t really have games from other makers, only Nintendo games," said Kaneko, a 35-year-old Tokyo resident.

The firm s vague new strategy comes a day after it announced a share buyback plan and Iwata agreed to cut his salary in half for five months to atone for a dive in earnings.

That came on the heels of a shock announcement this month that Nintendo would slip back into the red.

Poor holiday demand for the Wii U and its high-margin software meant console sales for the current fiscal year to March would come in at 2.8 million units, Nintendo said -- less than one-third of the firm s forecast.

By contrast Sony, which also has an online gaming subscription service, sold more than 4.2 million PlayStation 4 consoles by the start of this year, less than two months after its release. The Wii U has been on sale for over a year.

"The market had expected something new related to the smartphone business, but the results just disappointed," said Kenzaburo Suwa, strategist at Okasan Securities.

Serkan Toto, a Tokyo-based games consultant, questioned the frequent calls for Nintendo to move away from its console-based business -- as bitter rival Sega did about a decade ago -- and dive into the mobile gaming realm.

"By putting their games on smartphones ... I think that would ultimately kill Nintendo," he told AFP.

After a slow start, the firm has seen better sales of its 3DS -- the world s first 3D videogame system that works without special glasses -- and the original Wii with its motion-sensor controls was an unqualified winner.

"The point about Nintendo, why this company is so strong, apart from their existing intellectual property and brand appeal ... is their ability to innovate," Toto said.

"Nintendo needs something like (the original Wii)..But I don t think there is one magic bullet, one way that Nintendo can miraculously cure itself ... It will be a very difficult path going forward."