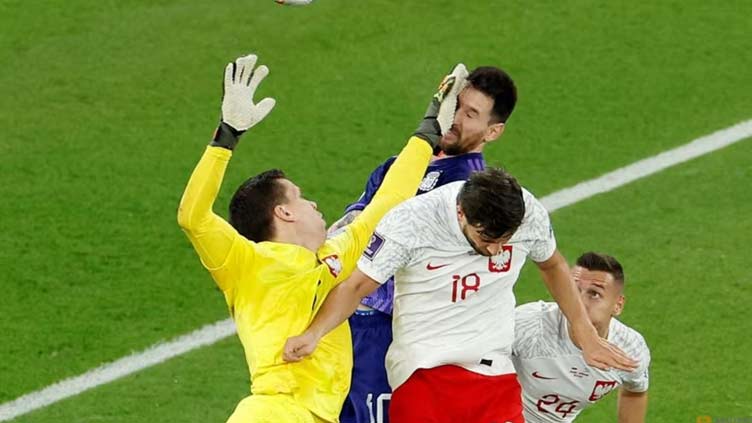 DOHA (Reuters) - After saving a penalty against Saudi Arabia, Poland s goalkeeper Wojciech Szczesny said he wanted to "face the best" at the World Cup - and true to his word, he was in the limelight again when he denied none other than Argentina s Lionel Messi from the spot.

The Juventus stopper has forged a reputation as one of Europe s toughest goalkeepers to beat from 12 yards and proved once again how crucial he is to Poland s hopes after they qualified for the last 16.

Poland may have ultimately lost 2-0 to qualify in second place in Group C, but not before Szczesny showed he was not one to be deterred on the big stage by a seven-times Ballon d Or winner and a blue-white sea of Argentina fans behind him.

In doing so, Szczesny became the first goalkeeper to save two penalties at a World Cup tournament since American Brad Friedel in 2002 and only the third in all, along with compatriot Jan Tomaszewski who first achieved the feat in 1974.

The penalty awarded to Messi was questionable, with Szczesny s outstretched hand brushing the Paris St Germain forward s face after he had headed a cross wide, but the referee saw it as a foul after a VAR check.

"I immediately told the referee that I touched his face with my hand, but I only ran over the side of his face. I told him that the contact was there, but in my opinion there was no penalty," Szczesny told TVP Sport.

"The referee decided otherwise and that s good - I was able to show off.

"On some penalties Leo looks at the goalkeeper and on some he hits hard. I knew that if he was going to hit hard, it was more to my left. I saw that he didn t stop, so I went (left), I sensed it and I saved. I m happy."

Since making his senior club debut in 2009, the 32-year-old has saved 26 penalties in his career -- barring shootouts -- for Brentford, Arsenal, AS Roma, Juventus and the Poland national team.

Standing at 6 5", his towering frame and long reach coupled with his ability to dive quickly to either side after shimmying on the line has made even the most experienced penalty takers second guess at the last moment.

Szczesny has also denied several players when they try to score on the rebound, leaping quickly into their path.

These double saves, like the one where he denied Saudi Arabia s Salem Al-Dawsari from the spot before parrying Mohammed Al-Breik s effort from the rebound, are popular fodder for the highlight reels.

Last season he saved three penalties in a row for Juve between October and March -- twice against his former side Roma which effectively sealed the points as Juve won both games by one-goal margins.

Should Poland be able to keep France s exceptional attack at bay in the last 16, there is no better player they can count on in penalty shootouts against the reigning champions.

But for now, he will celebrate Poland s progress to the knockout stages for the first time in 36 years.

"My whole family is sitting in Warsaw watching all together - my mother, my wife, my son," he said, adding to the camera: "I love you, Liam. Dad is not coming home!"