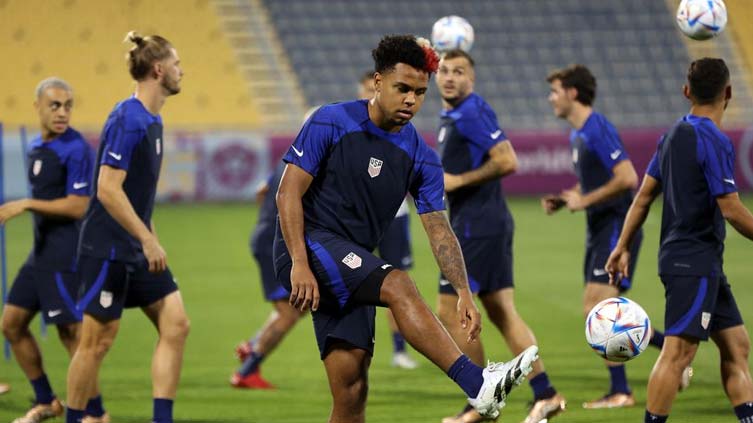 DOHA (Reuters) - Diplomatic foes the United States and Iran face off on the pitch at the World Cup on Tuesday in a match that some Iranians fear may see further run-ins with stadium security or clashes with pro-government fans over raging protests back home.

The contest between the two nations that severed ties over 40 years ago will be held with increased security to prevent a flare up of tensions over the unrest that has gripped Iran since the death in custody of 22-year-old Mahsa Amini on September 16.

In a show of solidarity ahead of the match, the US Soccer Federation temporarily displayed Iran’s national flag without the emblem of the Islamic Republic, leading Tehran to complain to FIFA, according to state media.

Qatar, which has strong ties with Washington and friendly relations with Tehran, has staked its reputation on delivering a smooth World Cup, beefing up security at Iran games and banning some items deemed inflammatory, like Iran’s pre-Revolution flag.

When Iran beat Wales on Friday, security teams were deployed to "break up a small number of altercations" between Iranian fans outside the stadium, a Qatari official said, adding the incidents were dealt with "swiftly" to contain tensions.

"I will not attend the game on Tuesday since I do not feel safe in Qatar," said Iranian-Canadian Azi, declining to give her last name and who was wearing a T-shirt declaring ’Women, Life, Freedom’ - a slogan of the Iran protests.

"Qatar is conducting the same censorship system as what is going on in Iran ... Also FIFA is to take the blame," she told Reuters about being stopped by stadium security for her attire.

Hila Yadegar, 37, plans to be at the match to show support for protesters even though she and her husband were both briefly held by stadium guards at the Iran-Wales match and despite voicing similar unease over security in the Gulf Arab state.

"I put a chair behind our room in the hotel even though it was locked," said Yadegar, who works in a hospital in Canada.

The Qatar official, when asked about fans’ security concerns and complaints over restrictions, said authorities would ensure every match at the World Cup is "safe and welcoming for all spectators".

Items that "could increase tensions and risk the safety of fans" would not be permitted at stadiums, the official said.

Politics have spilled into the tournament, the first held in a Middle East country, with the Iran team facing pressure to side with protesters.

Iran players declined to sing the national anthem in their first game against England, which they lost 6-2. They sang the anthem ahead of their second match, a 2-0 win over Wales.

After Friday’s victory an Iranian fan in a T-shirt with an image of Supreme Leader Ayatollah Ali Khamenei and Qassem Soleimani - a top Iranian general killed by a U.S. drone strike in 2020 - chanted over fans voicing support for protesters.

The nationwide unrest in Iran poses one of the boldest challenges to the theocracy since the 1979 Islamic Revolution. Washington has imposed sanctions on Iranian officials over the deadly crackdown on protests.

The United States and Iran severed formal relations in 1980 after the Revolution and ties were hostile when their soccer teams clashed in the 1998 World Cup. Iran emerged with a 2-1 victory in a game dubbed the "mother of all football matches".