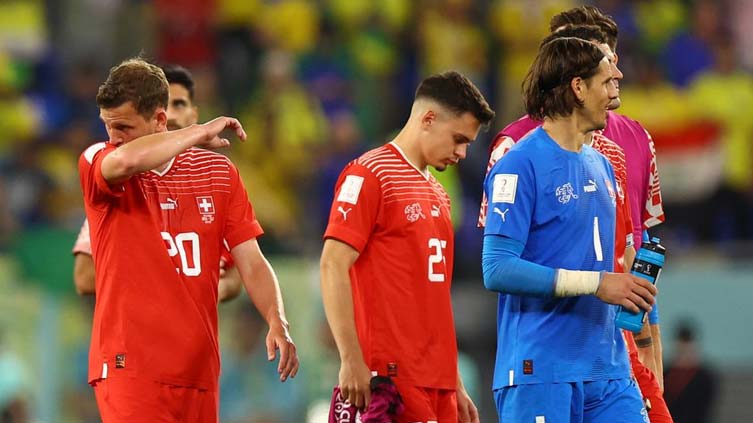 DOHA (Reuters) - Swiss coach Murat Yakin bemoaned a lack of attacking courage in his team’s 1-0 defeat by Brazil on Monday but said he could not be disappointed by a battling performance that gave him confidence for their decisive game against Serbia.

The Swiss had largely kept their illustrious opponents at arm’s length for most of a tightly-contested match but were undone by an 83rd-minute goal by Casemiro that sent Brazil through.

Switzerland, on three points, still look well-placed to join them. A win in their game against Serbia would guarantee progress while a draw would also be enough unless Cameroon pull off a shock win over Brazil, which would then mean goal difference would come into play.

"The game plan seemed to be working for a long time and we had control of the game," Yakin told reporters. "It’s a disappointing outcome as we let it slip through our fingers.

"We lacked courage in attack to a certain extent. Congratulations to Brazil, but with a little more luck we could have done more. I can’t really blame the team, they did a good job today, and had good control over a very good Brazil team for some time."

Yakin said the performance, coming after their opening win over Cameroon, left the side in a good place ahead of their showdown with Serbia, who will need to win to have any chance of progress.

"We are getting more experience in these type of tournaments and we are competitive against the bigger teams," he said. "It was a good performance in many ways and I feel this is the right path for Serbia, which will be completely different.

"I think we can be the dominant team and think we’ve proven that in the past."

Yakin said, however, that they would not take the risk of playing for a draw. "You can’t send a team out saying a draw is enough," he said. "We need to try to win this game and we have the skills and quality to do so."

Yakin added that Xherdan Shaqiri had been left out of the match as a precaution after feeling a slight muscle strain but he expected him to be back to face Serbia.