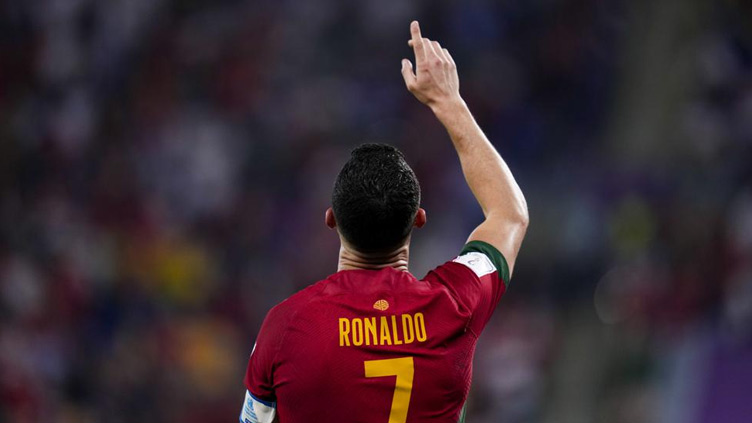 On Thursday he became the first man to score in five World Cups.

DOHA (AP) — Another game, another personal milestone. For all the turmoil that has surrounded Cristiano Ronaldo ahead of what is likely to be his final World Cup, the Portugal great continues make his mark.

On Thursday he became the first man to score in five World Cups.

Earlier this season he registered the 700th club goal of his career.

Not bad for a 37-year-old, who doesn’t know where he will be playing beyond Qatar after having his Manchester United contract terminated in the wake of his incendiary interview criticizing manager Erik ten Hag and the club’s owners.

A win against Uruguay on Monday would secure Portugal’s qualification from Group H to the knockout stages with a game to spare after its opening 3-2 win against Ghana.

“This is just the beginning,” Ronaldo said in an Instagram post, adding that “there are no impossibilities.”

But if soccer’s ultimate numbers man is to achieve his ambition of lifting the one major trophy that eludes him, he cannot do it by himself.

That much was clear against Ghana, when Portugal also needed goals from Joao Felix and Rafael Leao to hold on for victory.

Felix is the likeliest heir to Ronaldo’s throne as Portugal’s inspiration-in-chief – and has even been linked with a potential move to United.

If Qatar is Ronaldo’s last World Cup dance, the moves are not quite as fluid as they once were.

His goal against Ghana came from the penalty spot, rather than a moment of the type of individual brilliance on which his career has been built.

That being said, FIFA Technical Study Group member Sunday Oliseh still described as “total genius” his ability to win a disputed foul from Mohammed Salisu that Ghana coach Otto Addo insisted should not have been awarded.

Ronaldo’s celebrations suggested he does not care where the goals come from, so long as they keep on coming. But Portugal cannot solely rely on such moments — and amid the noise that surrounds its most celebrated player, it can be forgotten how much talent coach Fernando Santos has at his disposal.

“A selection with the quality of ours has to be favorite in any game,” said Portugal forward Goncalo Ramos ahead of Uruguay at the Lusail Stadium. “It’s important to win the second game now.”

Uruguay drew 0-0 with South Korea in its first game of the tournament.

Like Portugal, Uruguay is blending the old and the new. Ronaldo’s long-time rival from their time at Real Madrid and Barcelona respectively, Luis Suarez, is in an attack that also features the country’s new generation of talent in Darwin Nunez and Facundo Pellistri.

At 35, Suarez is no longer the force he once was and he was substituted just after the hour against South Korea. Another 35-year-old in Edinson Cavani replaced him, but Uruguay still couldn’t find a goal.

Ghana exposed vulnerabilities in Portugal’s defense – but Uruguay will need to be much more clinical if it is to capitalize on Monday.