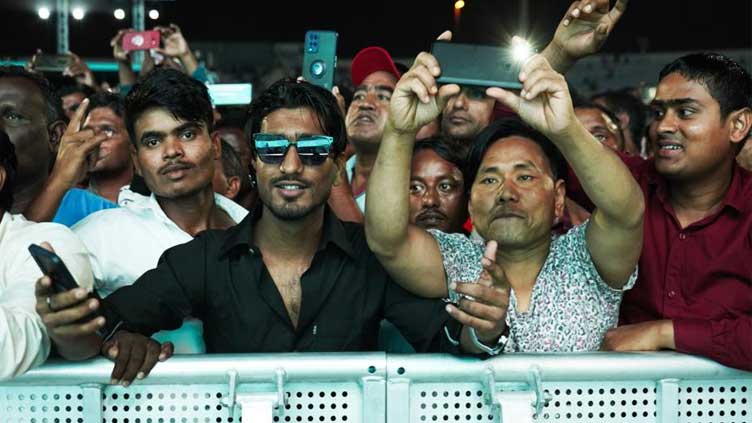 Unlike the official FIFA fan zone near Doha’s pristine corniche, this one has no $14 beer or foreign tourists. There are few food options beyond deep-fried Indian snacks, scant soccer jerseys in the crowd and even fewer women.

Instead, the grassy pitch in Asian Town, a neighborhood of labor camps, is packed with migrant workers from some of the world’s poorest countries. They power Qatar, one of the world’s richest, and helped accomplish its multi-billion-dollar stadium-building effort.

Their treatment has been the controversial backstory of the 2022 World Cup, ever since Qatar won the bid to host the soccer championship. They can face low wages, inhospitable housing and long hours, often in the scorching heat.

But on Friday night as the Netherlands played Ecuador, the bleachers of the cricket stadium heaved with workers reveling on their one day off of the week.

The lucky ones scored a small number of World Cup match tickets that went on sale for just 40 riyals ($10) — a special cheaper ticket category for Qatar residents.
But for those who can’t afford to go to gleaming stadiums, the giant screens in Asian Town have become a key glimpse into the tournament that has reshaped the tiny emirate.

“Who can afford to go? I keep 400 riyals ($109) a month in my pocket,” said Anmol Singh, an electrician, who sends the rest of his $600 salary to his parents and grandparents in Bihar, eastern India. “I work to give it all to them.”

Even if meager by Western standards, the salaries of migrant workers in Qatar and across the oil-rich sheikhdoms of the Persian Gulf often exceed what they could make back home and serve as lifelines for their families in India, Nepal, Pakistan and Sri Lanka.

Workers in the fan zone who spoke to an Associated Press journalist on Friday said they coveted their jobs in the country, which has strict laws on speech. The yearslong boycott of Qatar by four Arab nations also stoked nationalism among the migrant workforce that makes up some 85% of the country’s population.

Kaplana Pahadi, a 21-year-old cleaner from Nepal, strolled through the crowded cricket stadium with three co-workers she called “my family.”

Decked out in a maroon Qatar jersey, scarf and cap, she said she moved to the energy-rich emirate over four years ago to pay medical fees for her mother, who developed heart problems after her father’s death. “She’s always sick,” she said. “I want to help her.”

At half-time, the floodlit stadium became a riot of music and dance. A celebrity Indian emcee whipped up the crowds as Hindi pop blared.

Some men hoisted themselves up on the shoulders of their friends. Others jumped up and down with excitement. Most wore jeans and T-shirts, or cream shalwar kameez — a knee-length shirt with a pair of loose-fitting trousers common in South Asia.

Hundreds took out their phones to film the reverie, smiles spreading as women in LED-lit white dresses traipsed onstage.

It was a stark respite from the daily grind.

“These are people from companies doing hard work,” said Imtiaz Malik, a 28-year-old IT worker from Pakistan, gesturing to the crowds of men. “But any kind of work is good.”

He said he misses his family back in Lahore, Pakistan, and wishes he could hear their voices more often. Despite the difficulties, he said, Qatar has become his home, too.

“This country is becoming better,” he said.

The glaring spotlight of the World Cup has compelled Qatar to overhaul its labor system. The country scrapped the kafala system that tied workers’ visas to their jobs and set a minimum wage of 1,000 riyals ($275) a month, among other changes. Still, rights groups argue more needs to be done. Workers can face delayed wages and rack up debt paying exorbitant recruitment fees to land their jobs.

Imran Khan, 28, said many young men in his hometown of Kolkata, India, dream of working in Qatar. He left his parents and brothers behind to search for work in hospitality during the World Cup. But he has yet to find a job.

The competition is fierce and work harder to come by now that the tournament is underway, he said. In the meantime, he spends his days watching matches on the big screens at the cricket stadium next to the mall.

The fan zone allows Khan and legions of other migrant workers to enjoy the World Cup atmosphere just a short walk from their dormitories. It also means they’re not taking the bus into downtown Doha, which is now filled with foreign fans watching games and celebrating.